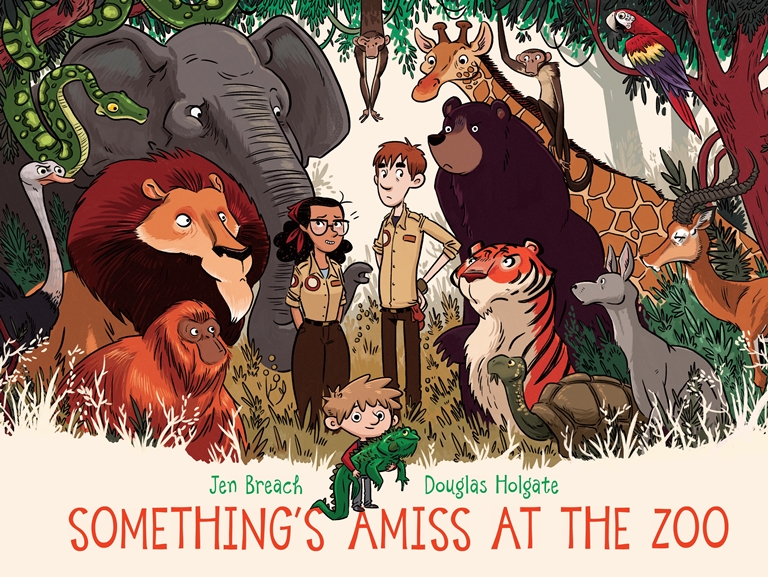 Two acclaimed comic creators, Jen Breach and Douglas Holgate have teamed up in this utterly riotous tale of a boy who reorganises chaos at the zoo caused by a pair of incompetent zookeepers.

In a classic comic style, with informal and witty dialogue supported by bold and animated cartoon characters in pictorial spreads, we meet the (unnamed) modest kid who has been called in to take charge of a perplexing situation. The daft zookeepers don’t understand why the Spider Monkey is afraid of the spiders, the Tiger Shark is an outcast in the tiger enclosure, an Elephant Beetle can’t withstand the presence of elephants, and why Banana Spiders are not edible pieces of fruit.

The pictures speak louder than the words. Minimal text and rapidly changing scenes move the story along at a quick pace with little explanation, prompting the book’s audience to decipher the lateral meanings on their own through the visual clues in the illustrations.

Something’s Amiss at the Zoo is an interesting look at zoology, with an inventive twist. Teetering on slightly sarcastic connotations, its language and pictures are simple and comical enough to keep primary school-aged children entertained and encouraged to explore further Literacy and Biology experiences. In conclusion, it’s a playful book, but sways on the side of ridiculous!