I was very excited to have the opportunity to put questions to Fiona Wood, author of Six Impossible Things, and Wildlife, and her latest, just released title, Cloudwish. Her answers are gracious and insightful.

How did you get started as a writer?

Writing is a second-stage career for me. I started with freelance journalism when I was at home on maternity leave with my first baby, then went on to study screenwriting at RMIT. I wrote TV scripts for twelve years, and finally started my first novel, Six Impossible Things, about eight years ago; it was published five years ago in Australia, and last month in the US.

Which author(s) were your inspiration when you were young?

Enid Blyton probably had a lot to do with my early onset reading addiction. I loved all her books: the Faraway Tree and Wishing Chair books, the boarding schools books, and all the mysteries and adventures. And I can clearly remember the absolute thrill of reading The Wolves of Willoughby Chase by Joan Aiken. I adored C.S. Lewis, E. Nesbit, L.M. Montgomery and Louisa May Alcott. Those early encounters really made me fall in love with reading.

I’m not a morning person, sadly. I try to get a few admin things done before I start writing. I work in a studio away from home and during the actual writing phase of a novel, will be there five or six days a week. I try to write a thousand words a day when I’m writing a draft, or a chapter or two when I’m rewriting, or a number of pages a day when I’m editing or proofing. In a funny way there isn’t really one sort of typical day, because the phases of the work are so different.

Can you describe your workspace?

It’s a very small studio space, one metre wide, with a long desk and a view of a brick wall and water heater. No distractions.

Any words of advice for young readers and writers?

Really, the main thing is just to get into the habit of reading for pleasure. Give reading some priority time. Ask for recommendations from friends and family and teachers and librarians. The more widely you read, the better. And write, too, of course. Writing a journal can be fun from a number of points of view – it’s a private space to think about things, and vent a bit of spleen, and it’s a great memory resource when you’re older. If you are keen to be published, it’s a good idea to join a local writers’ centre; by doing that you find out about workshops and competitions and festivals and publication opportunities.

Do you have a favourite book or character (your own or somebody else’s)?

No. Though if I’m asked to choose a favourite writer, it’s Jane Austen.

I write in silence. I always have a mid-morning coffee. Lunch depends on what leftovers I have in the fridge. Often I just buy sushi. I sometimes get a strong 4pm craving for snakes (the lolly version), but I never have them in my office.

If you could have one wish for the world what would it be?

What inspired you to write Cloudwish?

One of the inspirations was a tutor program, Friday Night School, where I volunteer. There were a couple of things that specifically influenced me to take on a Vietnamese Australian main character: spending time with students from the Vietnamese Australian community over a number of years, seeing how lucky they were to have the richness of two cultures, and, from time to time, how frustrating it could be to have to navigate between the two cultures, representing each one to the other; and hearing from my student that Uyen Nguyen, a Vietnamese Australian character in Six Impossible Things didn’t have enough to do to be very interesting. So I created Vân Uóc Phan in Wildlife, intending to make her the protagonist of Cloudwish.

Another inspiration was Jane Eyre, and wanting to use the character of Jane Eyre as a reference point for Vân Uóc. Like Jane Eyre, Vân Uóc has a quiet demeanour, but strong opinions and a passionate spirit.

A third inspiration was the gift of a small glass vial from YA author and friend, Simmone Howell, that inspired the whole magic story strand.

How conscious were you of the #diversityinya campaign when you started work on this novel?

I wasn’t aware of it at all. Cloudwish was contracted, here and in the US, based on a synopsis, early in 2013, and I’d finished the first draft by the time I started seeing #diversityinya and #weneeddiversebooks on Twitter in 2014. I support the objectives of the campaigns, and in writing a Vietnamese Australian main character I’m offering readers a book that reflects our diverse society. Of course, importantly, these campaigns also have a much broader, systematic objective of creating strategies that will result in greater diversity within the ranks of writers, editors and publishers.

I hope readers from both groups find the book to be enjoyable. I’d like Asian-Australian teenagers to expect to see themselves in the pages of fiction, in our multi-cultural society, and Cloudwish provides one instance of that. I’d like Caucasian-Australian readers to likewise expect a diverse range of characters on the bookshelves, and, again, this book offers one example of that. And I’d like readers from both groups to see that Vân Uóc and Billy have heaps in common, despite their different backgrounds.

How do you balance the ideas expressed by Alice Walker in the quote you include at the beginning of Cloudwish, with the almost contradictory view that argues all 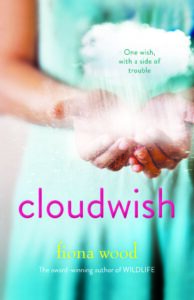 minority groups need to see themselves on bookshelves?

To me, the quote is very much about the fact that minority groups within English speaking cultures have always been expected to read and study books featuring predominantly white protagonists/white characters. The quote suggests that real empathy goes beyond projecting yourself into an experience that is superficially just like your own. I don’t read the quote as being contradictory to the idea that minority groups need to see themselves on bookshelves. I infer that Alice Walker is saying it should work both ways: that white people would ideally be able to easily identify with black characters, just as she was easily able to identify with a white character, Jane Eyre. And I think something that would facilitate this two-way traffic in empathy is seeing better diversity of characters, and of writers, on the bookshelves.

Cloudwish is a novel that dances lightly and deftly over incredibly serious and challenging ideas. Was it a conscious decision to adopt that tone? Or did it evolve more unconsciously?

I was conscious of the tonal contrast of material in the two main story strands – one an investigation of identity via the whimsical love story, the other an investigation of identity via the gruelling discovery by Vân Uóc of part of her family’s history. I did a lot of work trying to get the balance right, and I remember talking it through in the early days with a writer friend, and worrying that I wouldn’t be able to make such contrasting material sit well together. But I stuck with it because I wanted to reflect that life looks a lot like this. Each of us has an ever-shifting hierarchy of problems, large and small. Sometimes the trivial things occupy us, and sometimes, the profound.

So, for example, in the opening passages of the book, Vân Uóc makes an idle wish about Billy Gardiner, a boy she has had a distant crush on for a while, then in a free writing exercise that only she will see, she writes with righteous anger about the government’s stance on refugees, and finally she begins an essay on that topic, using measured and rational language. All of that happens within one English class, and each facet – idle wish, angry rave, studious response – is equally true as a reflection of her character.

Keeping the overall tone consistent is a way of showing that a huge range of feelings and experiences, and a range of public and private responses, and perhaps even some magic, are all encompassed within the scope of ordinary daily life

Were there other historical literary heroines vying for Jane’s role? Or was she an easy choice?

An easy choice. Vân Uóc sees parallels between herself and Jane Eyre. Jane is the ultimate demonstration that integrity trumps privilege; that who you are does not equate to what you have in your purse. She has modest status, and no ostensible power, but she prevails at every crucial moment in the narrative due to strength of character. She is materially poor for most of the novel, but has strong self-respect and self-image. She’s also an artist. And, in Mr Rochester, she see things that are not apparent to everyone else, just as Vân Uóc sees things in Billy Gardiner not apparent to everyone else.

Tell us about the magical element of Vân Uóc’s journey. How do you want people to read it?

As they wish to. I’ve written it so it is absolutely possible to believe that magic happened, or to believe that magic did not happen, and whichever you believe, the end point is the same. The name of the visiting writer who takes the creative writing workshop is an anagram of Charlotte Bronte. If readers want to go beyond the immediate reading of her function in the story, she is also there as a purveyor of the idea that books and story are a magical part of real life. 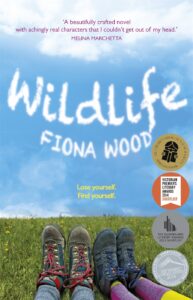 What is about companion novels that you like? What is the advantage of including characters like Michael, Lou and Holly?

I love the idea that everyone has a story worth listening to. So it’s very satisfying to create a minor character in one book and then put her at centre stage in another. Vân Uóc is a quiet, inconspicuous friend of Michael’s in Wildlife and the protagonist of Cloudwish. Lou is a minor character in Six Impossible Things, and then one of the two point of view characters in Wildlife. It gives me a ‘real world’ feeling about the characters, that they live on between narratives, and migrate from book to book, and I hope that readers might get that feeling, too.

You also introduce new secondary characters, like Jess and Eleanor, who add so much authenticity to the narrative. What do you hope these characters give readers?

I had spent quite a lot of time plotting a dysfunctional friendship between the characters Sibylla and Holly in Wildlife, so it was a lovely to create a positive, supportive friendship between Vân Uóc and Jess in Cloudwish. Jess looks from the outside and disapproves of Vân Uóc’s maybe romance with Billy, whom she considers an unworthy suitor for her bestie, but her motivation is to protect Vân Uóc, very different from Holly’s self-interested meddling in Wildlife.

Is there anything else you would like to add to let us know more about Cloudwish?

A few readers have asked about Atienza Lane, the hidden street lined with Seville orange trees. It only exists in my imagination – and in the book.

Thank you Fiona for your generous responses. Read my review of Cloudwish here.