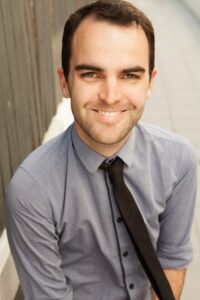 Brisbane playwright David Burton, has just published a book called How to be Happy: A memoir of love. sex and teenage confusion. It is the first non-fiction book to win the Text Prize. At its core, How to be happy is a serious yet humorous exploration of depression and anxiety. At his launch, David agreed to be interviewed, and answered a couple of tough questions in a thoughtful and gracious manner.

How does writing extended prose compare with stage plays and theatre works? Can you see yourself writing more for young adults?

There’s a lot of similarities between books and theatre. The basic rules of story-telling still apply. In theatre I write a lot for young people as well. I love young adult audiences. They see straight through dishonesty, and they demand real, gripping drama. They’re a very frank readership and audience, but if you give them something that connects, they’re the most loyal audiences you’ll find. So I’d love to write more for young adults, in fact I’m working on a follow-up now.

The biggest difference between writing prose and theatre is the team. For prose, there’s just you and an editor – and the editor comes in at the end of the process. So it’s a very lonely thing. Which can be lovely, but also isolating at times. It means you’ve got nothing to fall back on but your own head. It’s the ultimate in endurance sport. Theatre’s very different. I’m used to being alone for the first couple of drafts, but then opening up to collaboration with directors, actors and technical designers. That part of the process can be thrilling, and that’s when the work surprises you. Of course, the flip side is you lose some creative control.

I understand that you had to change everyone’s names, but you didn’t change your wife’s. What was the thinking behind that?

I changed names for the sake of privacy. I didn’t change the names of my family or my wife, because I figured anyone with decent internet knowledge who really wanted to know who they were, could find out. My wife’s also moderately well known as a successful actress in Brisbane, so it felt pointless to try and hide her.

You said at the book launch at Avid Reader that the book changed through the editing process. Can you give us some idea of how much had to be re-worked? 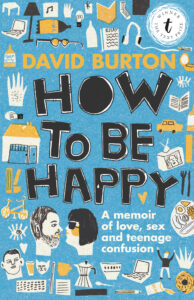 All works change during editing, and I think my experience was fairly normal. It’s fundamental, but pretty boring stuff. The content didn’t change, but the presentation of it did. Some chapters were shorter, some longer. Excerpts were removed because they slowed down the narrative. Overall, my wonderful editor Jane Pearson really urged me to stick with the narrative as much as possible. In early drafts I kept wanting to duck out of the story and talk to the reader directly, giving them advice or talking about the themes of the work. As we know, teenagers like nothing more than being lectured to. So I removed those pieces and tightened the work overall.

Your book deals a lot with sex. That makes it a challenging decision for school libraries. Can you give us your reasons why we should have it on our shelves?

I can understand how some people might find it confronting. But I’m surprised by people when they say that the subject matter of sex is the most shocking element – when the main theme at the heart of the book is depression, and the fact that I wanted to kill myself is somehow less disturbing than me admitting that I didn’t know whether I fancied boys or girls.

Here’s the thing: teenagers think about sex. And they’re hungry for information. When I was a teenager, I just wanted to know more. And the lack of information I had meant I developed all kinds of weird stories in my head about what sex meant or how I should behave, which were entirely incorrect. Providing no information about sex doesn’t do teenagers any favours. Providing honest information that advocates responsibility does a world of good.

So, to be clear, the book talks about masturbation, about safe sex, and about my own sexual confusion. I, like most humans, have made mistakes in regards to sex, and I examine those mistakes and why I regret them. I don’t detail sexual acts in any kind of anatomical detail, and at no point does the book try to be titillating or perverse. I simply detail the process in my head of trying to figure out who I was sexually. Overall, it advocates responsibility and serious and meaningful consideration of sexual identity. It shows the consequences of impulsive decisions and sexual ignorance. I would hope that schools would want such materials on their shelves.

Not to mention, as I say, that sex is just one aspect of the book. It also deals with disability, academic pressure, anxiety disorder and depression.

Thank you David for your insightful responses.