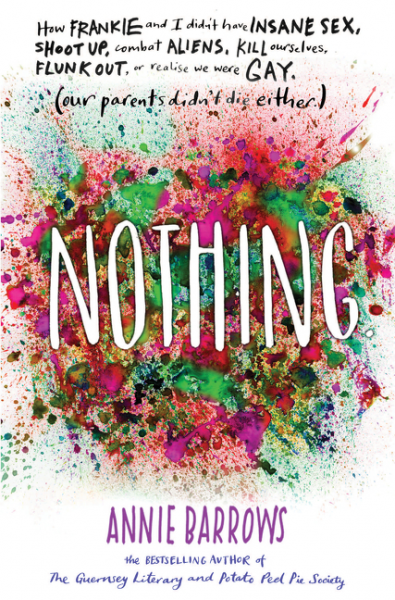 The front cover of Nothing sets the tone of the book perfectly:

“How Frankie and I didn’t have insane sex, shoot up, combat aliens, kill ourselves, flunk out, or realise we were gay (and our parents didn’t die either).”

And really, nothing much does happen.

The characters of Charlotte and Frankie are not unlikeable despite their painful vocabulary and love of profanity. Their voices are frustratingly authentic as Barrows successfully captures the vernacular of two bored teenagers.

With a determined lack of plot, the novel relies on events with minor characters to add interest to the story. At other times, the novel satirises the YA genre and the push for diverse stories.

The lack of the girls’ goals and motivations, whilst realistic for some in that age group, mean little happens with these characters to drive the storyline. It is an almost conflict-free plot. Barrows attempts to recreate the quirkiness of a nothing story that was so successful for writers of similarly themed sitcoms.

For me, Nothing was rarely engaging with its focus more on capturing the mundane dialogue of teens than on moving forward a narrative. It is less of a character journey and more of a tag-a-long in the life of two fifteen-year-olds.