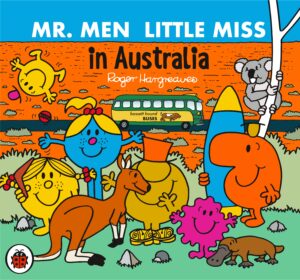 Mr Men in Australia is one of several books released to celebrate the series’ 50th anniversary. This new Australian story takes many of the beloved characters on a colourful adventure throughout the vibrant Australian landscape, highlighting some of the country’s most notable landmarks; the Sydney Harbour Bridge, Bondi Beach, the twelve Apostles, Kakadu National Park, and the Great Barrier Reef, to name a few. Little readers will find a great deal of humour consistent with the series, whether it’s Miss Scatterbrain trying to play golf in a cricket match or Mr Topsy-Turvy sending the gang in the wrong direction.

Though Mr Men in Australia has a timeless quality that sets itself up to be enjoyed by many future generations, this timelessness is also a drawback. The writers and publishing team should have done more to respect modern Australian representation without falling into lazy stereotypes – raise your hand if you’ve seen one too many characters take a ride in a kangaroo pouch!

Furthermore, there are some real issues that Australians are addressing, making them problematic when put into a picture book as a joke. With so much backlash against the Melbourne Cup as animal cruelty statistics come to light, should Mr Silly have made a game of riding a camel in the race? More significantly, it’s disappointing to see the rich, vast, Indigenous Australian culture downsized to a single page featuring one First Nations character whose only contribution is a bush-tucker walk and a witchetty grub that Mr Greedy didn’t want to eat. That kind of ‘typical’ representation of Indigenous Australians is outdated and problematic – they could and should have done better.

That said, the illustrations beautifully reflect both the style of the Mr Men Little Miss books and the smorgasbord of Australian scenery, depicting the colours of the outback, the bush, and the coral reefs in a true-to-life manner.

On the whole, Mr Men in Australia is an easy-to-read story for newly independent readers and would make a nice souvenir for young travellers to take home.