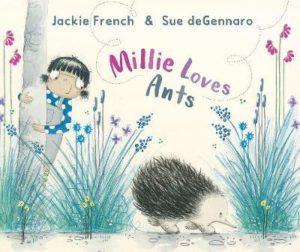 Millie Loves Ants features two main characters—a girl (called Emily in the publisher’s website blurb, but un-named in the book) and an echidna named Milly. There is also a variety of ants cavorting across many pages. The story is told from the perspective of the girl who tells readers, on the opening page, that Millie is her friend. The nature of their relationship is not explained in the text, nor is it evident from the illustrations. The girl observes Millie closely throughout the book, but the two never interact.

It’s hard to pinpoint the focus of this story. Is it the invasive ants that pop up in bathtubs and clothing, in hollow trees and underground tunnels? Is it Millie’s search for the ants as a food source? Or is it the girl’s witnessing of the natural world? After several re-readings, I was still unsure.

French’s text unfolds in rhyme with some word pairs highlighting the glorious irregularity of English spelling—mounds/towns and rain/campaign. There is an opportunity, via French’s vocabulary use, to introduce words that may be new to young children. Millie trundles past ‘tussocks’ and ants drag ‘debris’.

The book’s text ends with the girl-narrator reaching an understanding of why Millie needs so many ants:

The accompanying illustration shows Millie disappearing into her home. Turning to the final page, the reader sees, for the first time, a picture of a puggle (a baby echidna). The meaning could be construed as suggesting that Millie has been collecting ants for her baby to eat. I found this confusing. My understanding (from books such as Greg Pyers’ Echidna, rev. ed., 2011) is that puggles are nourished by their mother’s milk until the age of six to seven months. They are then weaned and leave the nest. This nutritional evolution is at odds with the inference of Millie Loves Ants.

If this picture book is intended to encourage children’s curiosity about the world around them, the addition of factual details about echidna behaviour, and about ant types and anatomy, could have been helpful. Publisher HarperCollins has produced Teachers’ Notes to accompany Millie Loves Ants. The notes include useful ideas for ant-seeking class walks, and some tips on scientific observation and record-keeping.