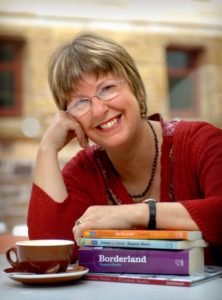 Rosanne Hawke’s latest novel, Jehan and the Quest of the Lost Dog, released in September published by UQP, continues her interest in sharing stories from other countries, specifically Pakistan. We asked Rosanne to tell us about how Jehan’s story began, and we thank her for this insightful piece.

When researching Kelsey and the Quest of the Porcelain Doll I found a photo taken by Waseem Qureshi of the Pakistani Environmental Protection Agency. It showed a boy living in a tree during the catastrophic 2010 Pakistani flood. I thought the boy needed a story and when author Phil Cummings suggested I write another book like Kelsey’s story, I began planning. I drew mind maps of the boy: who was his family, where did he come from and how was he surviving during the flood. Most importantly what did he want to do? To stay in the tree or to find his family? His name finally came from a school visit where I met a Year 6 boy called Jehan. ‘Your name means “world”,’ I said, suddenly realising this would be perfect for the boy in the tree. ‘Do you mind if I call my character Jehan?’ I also found an image of a dog surviving in the flood and so Lali arrived as a character. She would have her own chapters with doggie vocabulary and would be searching for her pups. I wanted Lali’s chapters to sound like a dog in third person limited point of view, not just a third person narrator talking about a dog. My son read an early draft and pointed out that Lali wasn’t ‘doggie’ enough yet. So I did more research. I discovered the amount of information that dogs detect from a sniff is more than I realised, and so I rewrote the manuscript (again) in an effort to show Lali’s true nature.

I wrote most of the original draft by hand while camping with my husband. We were following the explorers’ rivers: the Cooper Creek, the Darling, and the Murray. Seeing all that water (although just a drop compared to a flood) helped me see what Jehan may be seeing. The story changed a lot through consecutive drafts and later my editor, Kristy Bushnell, also had good ideas on what to cut and what to add.

The charpai that runs through the story comes from seeing at least one in every home I visited in Pakistan. Everything happens on a charpai: hospitality, eating, sleeping, telling stories, even homework. To Jehan, his charpai is not only a link with his family, but a connection to safety and community. Something he desperately wants to find.

Here is the photo published in The Guardian on Friday August 13, 2010 that inspired Jehan and the Quest of the Lost Dog.

Thanks again to Rosanne and Sally for UQP for this post.