Nadia Wheatley tells Reading Time how she came up with the idea for the Flight, her exciting new picture book, illustrated by Armin Greder.

As I write this, I am in Germany, where I have been attending the 70th anniversary of the liberation of the Bergen-Belsen concentration camp. My connection with Belsen is through my father, a British doctor, who while working for the United Nations Relief and Rehabilitation Association (UNRRA) in the immediate post-war period became Medical Superintendent of the hospital at the Belsen Displaced Persons camp (to which the Belsen concentration camp survivors were taken after the liberation). At that same time, my mother, an Australian nurse, was working for UNRRA in other DP camps in other parts of the British Zone of Occupied Germany. Some time later, they met and married; in 1949, my mother returned to Australia to give birth to me.

All of that may seem a long way from the landscape and the story of the picture book Flight, but throughout my early childhood in suburban Sydney I had a continual sense of refugees — not as an ‘issue’ but as real people of flesh and blood. One connection was through my name: my mother called me ‘Nadia’ after a DP friend in one of the camps, and my second name, ‘Christine’, came from a DP couple’s baby, who was my mother’s godchild. Growing up far away in Australia, I never met either of my namesakes — never even knew their surnames — but through the first six years of my life a steady stream of refugees whom my mother had known in various camps came to live in the flat that was attached to the side of our house. Forbidden to bother them, I paid my visits in secret, and as I lay in bed at night the sound of voices talking and singing in Polish used to come through my nursery wall with its Jemima Puddleduck frieze; sometimes, too, there was the sound of crying.

If I can trace the overall theme of Flight back to this early awareness of refugees, it was in these same childhood years that the place of the picture book, and indeed its narrative thread, were planted in my mind. I have read Armin’s description of the attraction that the desert landscape of the story had for him, and I am overwhelmed by the way he has captured that physical landscape as well as the emotional landscape of the refugee-couple who are fleeing through it. For me, this landscape first seeped into my consciousness from another picture book…

Growing up in the early 1950s, I did not have many picture books. There simply weren’t many on the market in post-war Australia. One of the things that filled this visual void was the album of my mother’s war photos.  Before joining UNRRA, she had served in the Australian army, and from 1941 to 1943 she was stationed in Palestine — initially in a tent hospital and later in an ancient building in Jerusalem that had been converted into a makeshift hospital. As a child I loathed having an afternoon sleep, and so to try to tempt me into a nap my mother would take me into her room and let me lie down on the bed with her. Unpersuaded by this ploy, I would drag the war album out of the bedside cabinet and make my mother read me the captions she had written under the small black and white snaps, and talk me through the stories that went with the images.

Some of these showed my mother in khaki uniform at the Donkey Races, in a floral cozzie on the beach at Gaza, in white nursing uniform with ‘the boys’ in a tent hospital ward, and in mufti with some of ‘the girls’ outside their own canvas home.  As well, there were images of grinning Arab children, of men and women in traditional clothing, of fishing boats on the Sea of Galilee, and of white-cube villages and sand dunes and something thrillingly called ‘The Wilderness’. Yet exotic though these images were, they were familiar to me from another book that was in the bedside cabinet.

My mother did not practise any religion, having had far too much of it (she always said) while growing up in a strict Methodist home, but she treasured a small Pictorial New Testament that she had been given for her seventh birthday by her grandfather (a lay preacher who himself had grown up as a missionary-child). This little book (now in my possession) was illustrated not with depictions of the stories in the accompanying text, but with paintings of street scenes and landscapes of the Holy Land. As my mother dozed, I used to compare both sets of pictures: one set photographs, the other set paintings; the former black and white, the latter coloured…

Given my mother’s feelings about organised religion, she never took me to church, but I was brought up on Bible stories as I was brought up on Grimm and Andersen and Aesop. Although I was aware that the Baby Jesus had been in the Holy Land some time before my mother and the ‘girls’ from the 6th Australian General Hospital, it was obvious to me that the place was one and the same. So when Christmas came around and the Nativity story was in the air, the landscape of the story was very real to me. Bethlehem was of course one of the white-cube villages that my mother had visited, and I could picture the sand dunes and the wilderness through which the Holy Family had journeyed as they made their Flight into Egypt: it was the landscape that I knew from the photo album. 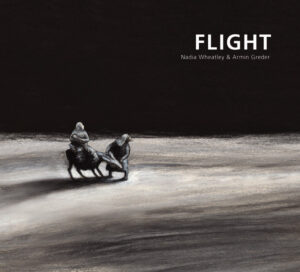 At this point we need to fast-forward some fifty years to the end of 2002, when the world was nervously waiting for the second war in Iraq to start…

I was living in Rome at that time, and as Christmas approached, I loved to visit the presepi that were displayed in every church. In these huge Nativity tableaus, which usually fill the whole of a side chapel, the traditional stable with the Holy Family is surrounded by a vast crowd of ornamental figures of varying sizes in a surreal version of Bethlehem that has castles, wells, taverns, windmills, and other landscape features that would not be out of place in Disneyland.

In stark contrast, however, to these charmingly kitsch extravaganzas, at Christmas time in 2002 the presepe in the Roman church of San Clemente featured the three tiny figures of Mary, Joseph and the baby alone in a rudimentary shelter in the middle of a huge expanse of sand. Instead of Wise Men on camels, tanks approached across the desert. Instead of the angel choirs drifting across a halcyon sky, helicopter gunships swung down from a tin ceiling pierced with what could have been bullet holes. The Peace flag (the single word PACE against a rainbow background) was in front in the tableau, attached to a wall of sandbags that ran right across the front of the chapel.

Some years later, when the idea for Flight came upon me, it brought together the two time zones that were accreted in the San Clemente anti-war presepe, and the two landscapes that I myself had accreted when I was a child, comparing my mother’s photos of Palestine with the Holy Land in the Pictorial New Testament.

As the idea took shape, I knew that what I wanted to do was to write the story of the Flight into Egypt in a way that initially lulls readers into thinking that it is set 2000 years ago; then suddenly, by introducing a bombardment and tanks, the story would become something that could be happening on the evening television news. Simultaneously, there needed to be a shift in the ‘back story’ of the characters and the peril that they are fleeing. After all, if the Holy Family were to be depicted as contemporary refugees, then I needed to think afresh about their cultural identity.