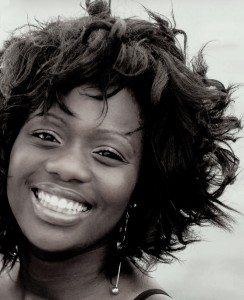 Choechoe Brereton is the debut author of the amazing and imaginative A HOUSE FOR DONFINKLE.  Choechoe loves writing. She also loves rainy days, hot chocolate, whales, friendly monsters and magical shops. She doesn’t know where she would be if she couldn’t imagine.  Luckily for all concerned, she does imagine and today she imagines for us at Reading Time….

I’ve been an elite nation-saving secret squirrel, witnessed the births and deaths of worlds no one would ever suspect true or possible, and befriended snarling, untameable beasts despite the grim warnings of naysayers.  My imagination is a funny place which, I suppose, makes me a slightly funny person—a dreamer to be exact.  I’m a little bit of a lot of things, too.  Ghanaian (because I was born to Ghana’s rich nation of hard workers and smilers); Irish (because the emerald isle first kicked off my love affair with snow, blazing woodpiles and shoebox cottages); English (because good ol’ Blighty gave me no choice but to tentatively unravel my tangled soul) and Australian (because I happen to call this great southern land home—for now).

In retrospect, the hyper knot of creativity I was as a kid makes perfect sense in the milky light of who I am now.  I was a burdened sprout, desperate to funnel my roiling love for writing and sketching somewhere.  Anywhere.  I loved stories, copied them, traced their illustrations and eventually learned to draw characters freehand.  And I wrote.  Folders and folders of firecracker ideas that phoomfed out in fizzing pompoms but never truly went anywhere.  When my convoluted tales of ballet dancers and haunted neighbourhoods unexpectedly fetched notable attention from my English teachers I hoped, contrary to my own belief, that my innards somehow retained a skerrick of talent.

But as all kids inevitably must, I grew up and opted for a ‘grounded’ career—one I was led to believe had better prospects all round.  It was a fallacy of course, but writing, like music, was considered an unreliable and fairly doomed path.  In the end, I pursued my second most favourite subject and became a scientist instead.  A double degree and years of lab time later I effectively clawed my way off the trials and test-tubes merry-go-round, a kid in thought again but older, wiser, and more confident in every other way.

For the first couple of years I was a horrible writer.  Utterly pants!  Discouraged, I turned back to science only to discover I couldn’t stand to be in a laboratory anymore.  That was a weird day.  I was no longer a scientist but not quite a writer.  I suppose, if anything, it made me work even harder.  I had nothing to go back to, so forward was the only way.

A House for Donfinkle was the first children’s book manuscript I wrote almost six years later.  As I often do, I was thinking about growing up, the youngling I used to be and the battles that ceaselessly raged on at school and in my head.  I was always bullied for reasons I still don’t quite understand, but having no confidence meant I rarely stood up for myself.  I wish I had and that, despite my gangly juvenile cladding, I’d been self-assured enough to go my own way regardless of how unconventional it seemed.  That became the loose premise for A House for Donfinkle, though.  I never set out to write a story with a ‘lesson’ or moral stance, but as it turns out, Donfinkle has one.  At face value it’s an exceptional and distinct rhyming tale with a likeness to Dr Seuss’ work.  At a deeper level, I hope readers find it encouraging and a testament to discovering value in what they think and believe.

So far, A House for Donfinkle has been incredibly well received.  It has attracted cracking reviews from IBBY president Dr Robin Morrow (four out of five stars no less), Magpies Magazine, The Mummy Project, Read Plus, Kids’ Book Review and many more.  I’ve been on the radio too, and enjoyed the delightful chaos of book readings and school supplemental classes.  What more could an author want, other than to always be paired with a phenomenal talent like Wayne Harris.  A House for Donfinkle is nothing without his exceptional illustrations.

I’ve always believed in loving life.  It’s clichéd but true.  Becoming a writer was an unmitigated risk for me, but one undoubtedly worth taking.  I will always be a dreamer—always strive to kiss the stars.  And maybe, if I’m super lucky, I’ll also be privileged enough to write a few wonderful books along the way.

Terry Denton’s Bumper Book of Holiday Stuff to do!