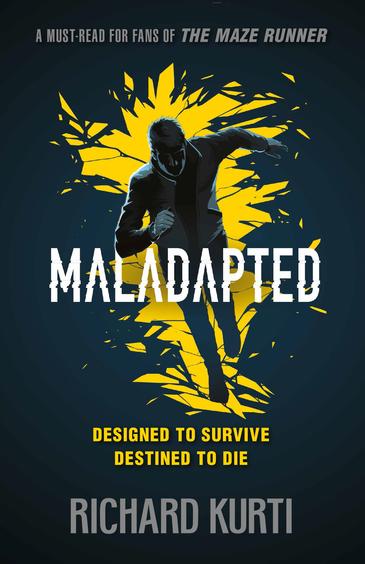 Maladapted is an action suspense novel is set in the near future, with equal billing given to a young man and young woman, Cillian and Tess, who find themselves isolated, hunted, outnumbered, and with only their wits, and their strong moral intuition that all is not right, to give them a chance. Some of the futuristic devices are well tried and have a now long tradition via Mary Shelley, Thomas Huxley and George Orwell.

In this novel they are present as explorations of genetic manipulation on fetuses, the merging of humans with their computers, secret laboratories, and a world of high-tech surveillance where democracy seems to have disappeared. The issues raised by the novel also mirror many of those facing our own troubled historical times, and recent history as well. Is total commitment to a faith-based cause a recipe for rationalizing the barbarism of mass murders? Is a bit of ‘ethical drift’ in the form of sacrificing ‘experimental’ lives, a price worth paying if science can find a way for humans to survive climate change, natural aging, illness and plague? One imagines such questions were asked and answered fairly pragmatically by scientists working on euthanasia projects in Nazi Germany, and scientists working on the atom bomb in the United States. The novel implies humane answers to these questions, but doesn’t shy from the fact that they are troubling, real and difficult. Fiction, and novels in particular are predicated on the assumption that individual lives, with individual consciousness, are of ultimate interest and importance. But what if each of us is just a link in a chain, a dispensable step in an accelerating evolutionary process that some humans might soon have the knowledge and power to direct?

This is a fine speculative novel, while also being a thrilling account of two young people discovering their origins, their identity, and finding themselves in mortal danger from powers that cannot afford to have them going free. Highly recommended that you read this novel, for there are bound to be further difficulties ahead for Cillian and Tess.

This is a novel for thirteen to eighteen year old readers who don’t mind powerful page turners, and big ideas in their fiction.