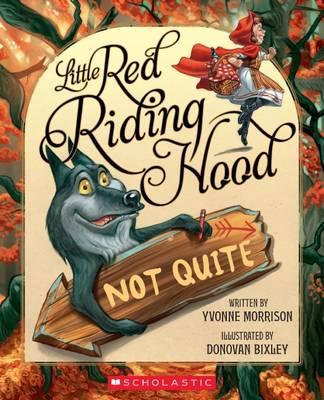 Something of a follow-up to the NZ Children’s Choice Award Winner (2014) The Three Bears… Sort of, we have a retelling of this ancient folktale where the authorial voice is not that of the knowledgeable adult with the implied listener as an innocent child but instead it is a dialogue between a precocious lad and his struggling mother. For every assertion the mother makes in telling (or at least trying to) the traditional tale, the critical child questions the truth-telling of the original story. In this process, we (as the readers) are forced to acknowledge the tensions between tradition and the contemporary and recognise that inevitably we bring our own lenses as we read. Children can be teachers! This dialogic approach to storytelling is visually expressed as we see the hand of the boy drawing pictures of the story being told as we read the speech bubbles/conversations of the boy and his mother (the contemporary), as we view the traditional text/illustrations that detail times past (with some illustrations alluding to earlier versions of the story). Why is she wearing a hood rather than a helmet (required by Health and Safety legislation)? Was she named at birth by her clothing?  Why did she walk through the forest and not ride a horse? Why was she met by one wolf and not a pack?  Can wolves really speak English? Didn’t Little Red not think this was weird? Come on Mum, did animals really talk like humans in the old days? (One can hear Mum’s exasperation as the speech bubble says “Never mind that” in a large font). This carnivalesque interplay of voices is of course the essence of humour (which unsurprisingly, is not the traditional point of the story as the moral ditty at the end of Charles Perrault’s 1697 version clearly asserts the folktale is a cautionary tale about lone wolves at the end of villages who can consume innocent girls). This version invites the reader to ask the question: is the author authoritative? Wonderfully postmodern. Highly recommended.