Winner of the Book of the Year (Early Childhood) Award 2015 for her picture book Go to Sleep, Jessie!, Libby Gleeson, spoke about using her children as inspiration in the thank you speech she gave at the Awards Ceremony at Melbourne Town Hall on Friday 21 August…

Getting up to speak at a moment like this usually calls for thank yous – and who am I to buck a trend.

But the first thank you, in connection with this book, goes to Jess and to Jo: two of my daughters who didn’t blink when it dawned on me after this book was accepted, that I should ask them if they minded.

Jessie, the screaming star of the book is in the audience here today – hi Jess – and can I say she and her next big sister Josephine, not only said yes – it’s OK to tell our family’s secrets in your books for kids, they launched it.

It’s true I do use my family’s secrets, or at least the life I lead in the context of a husband and three daughters, to enrich my fiction and picture books and I make no apology for that. It’s the life I lead and story comes out of the life you live.

I am so lucky to have Freya Blackwood as the illustrator for this book. Some years ago when I first began working with Freya I said that I had enormous admiration for her work and that I felt in the book we then did that there was a wonderful marriage of words and images. My admiration has grown stronger and I think her success today tells us what a force she now is in Australian picture book illustration.

It’s not just the emotions conveyed in her drawings of children, it’s also the way she chose to experiment with colour – the contrasting blues and orange delineating upstairs and downstairs – that I love. And the way in which the representing of images on the pages differ – from a spread showing lots of small illustrations across the double page to show movement and action, to the double page spread in the centre of the book showing the loneliness of the older child when the younger one has gone.

Thank you Little Hare and Margrete Lamond, our editor. Margrete is an editor who has nurtured us through five titles, so far, and she is also a writer and can see clearly  the implications of removing a single word or phrase. I say nurtured, but don’t be fooled, she doesn’t hesitate if she thinks you might be unwilling to make a change and she’ll work you through that, over and over.

Thanks too, Little Hare for your role in bringing us to Melbourne for the celebrations today. 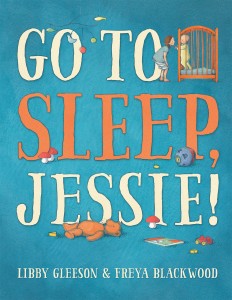 The judges had 400 titles submitted and even if you remove the 49 nonfiction titles, that still leaves 351 to read, digest and make a judgement on. I know how hard that is and I am so grateful that this year, this book was chosen. It could have been another, so congratulations to those others who joined us on the shortlist and in the notables.

As I said at the beginning, thank you to Jo and Jess for this story and to their big sister Amy for everything that first children teach their parents.  Those thanks extend to Euan, my husband and the father of these girls who not only wrestled with crying children in the night but has supported me all through this crazy career.

Go to Sleep Jessie grew out of our experience as parents. If it says anything to parents of young children everywhere, don’t shut the door on a crying baby, make sure you have more than one. We all like sharing our bed and they are no exception.