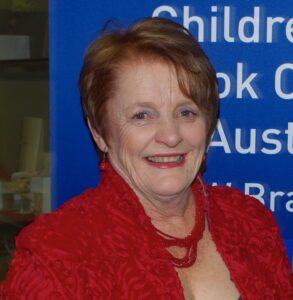 Winner of the Book of the Year (Younger Readers) Award 2015, Libby Gleeson, spoke about the importance of imaginative play in her thank you speech, given at the Awards Ceremony at Melbourne Town Hall on Friday 21 August.

Thank you very much for this honour that you have placed on The Cleo Stories.

Like so much of the work I have written for younger children, this book has come from the children I have lived with, the way that I have learnt of the rich imaginations that little children have.

Many years ago I was a teacher trainer at the University of NSW. A colleague there regaled me with stories of the role playing behaviour of her three year old. I had no children at that stage and I thought her imagination was running wild and confusing her son with the students we had who we were teaching to use role play techniques in language teaching.

How wrong I was. I was to discover this as each of my three children grew and became whichever character they wanted to be to enact whatever game they were playing.

My kids are now a lot older and the imaginative play of little ones is not so evident in our house, but a few years ago when Freya Blackwood and I began working together. She and her daughter Ivy came to stay and it all happened again. Ivy was about 3 or 4 and she filled our house with words and drawings and activities that so resembled the things I’d learnt from my own, many years ago.

So it was no surprise that this book is dedicated to Ivy and Amy, Jo and Jessie. And to Freya too. That’s because although story ideas came from experiences and the words from who knows where, the beautiful images are from Freya. She puts emotion on the face of a child in ways that I have not seen another illustrator do: disappointment and distress through to scheming and delight.

Freya, thank you so much for all the deliciousness you’ve brought to the books we’ve shared.

Thank you to the editors, Erica and Elise at Allen and Unwin who have supported Cleo at every turn.  It’s an unusual format of story book, heavily illustrated in colour and we think it looks beautiful.

And thanks to Allen and Unwin for their part in bringing us to Melbourne for these celebrations.

A big thanks must go to the CBCA for all the time, energy and commitment this organisation brings to the support and the celebration of Children’s Literature across the country. I have been quoted many times that to get on the shortlist of this award is to win. It is. And congratulations to all who have achieved that this year. But being the winner is truly special and I am grateful for that. 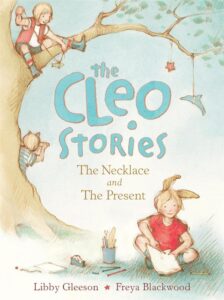 It has been 70 years. Not many voluntary organisation last anywhere near that length of time and that is in supporting an aspect of culture that has changed and a society that has changed in that time. The CBCA has moved with the times in examining its structures and reimagining itself a bit for the 21st century and beyond.

And something else, I don’t go back quite as far as the days when the winner of an award like this meant a handshake for the blokes and a camellia for the women. I remember in my early days the effort to find sponsors and the despair when sponsors pulled out. Thanks so much to the CBCA Awards Foundation and the efforts especially of Margaret Hamilton and June Smith who set it up and who came up with imaginative ways to raise the money that now funds the awards. We all owe you enormous gratitude.

And to Euan whose own creativity has been something I’ve shared for a long time. Lucky is she with a partner who complements whatever crazy ideas a person grabs onto and persists till a book emerges in the end.