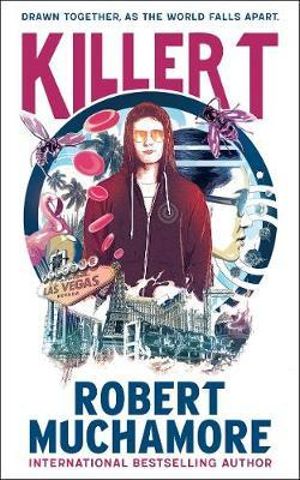 Robert Muchamore’s new novel is set in the near future, in a Las Vegas of tech and science savvy youngsters riding waves of opportunity in a world where almost anyone can be a journalist, where personal gene modifications have become as common as nutrient supplements in health shops, and where school is much less fun than making a few hundred thousand dollars selling photos or stories on news sites, or selling new genes to teenagers who need to be rid of their pimples, their pale skin and their scrawny physiques.

Harry and Charlie are the two we follow through this warped and warping, but not too unlikely world, as they come into their twenties, making money hand over fist by exploiting social media or by breaking the law on genetic modification. It is a wild ride among a privileged set of educated, articulate, heavy drinking, confused and yearning youngsters. Not only does the novel predict the overturn of all the usual ways information gets out into the world (we know already that this has more or less happened), but the novel warns us that gene modification technology will mean the release of virus based diseases that will decimate the developed world and cripple the third world.

‘Killer T’ is one of these viruses. Though we take the ride with Harry and Charlie, hoping that their love can see them through the risks they take into a better place, there is not much hope here for the larger world. Who among us could resist the chance to buy a better physique, a longer life, a tanner skin, higher intelligence, a boosted immune system? In this novel, there is a worldwide rush on such products, for humanity in this novel is ruled by the desire for the immediate gratifications that wealth, power and privilege can provide.

For those who want plenty of guns, thugs, explosions and plain evil in their thrillers, this book will satisfy. It is a curious novel, with its inspiration in Mary Shelley’s Frankenstein, and its heart grimly in a modern world.

Suitable for readers from 15 onwards.

On the Origin of Species