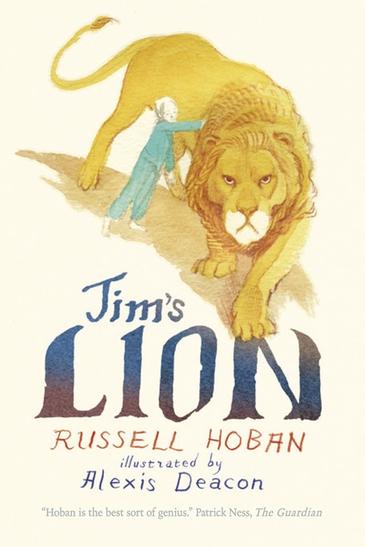 Like so much of Hoban’s work this book works largely through suggestion: the seemingly simple text and more especially the many copious, representational and chimerical illustrations stimulate the mind and the imagination.  The eponymous Jim is in hospital watching the snow whirling out of the grey sky, symbolic of the state of Jim’s mind that is yet to summon up a vast array of fantastical images.  Jim’s carer and companion is Nurse Bami from Africa.  She has seen, and obviously described, exotic animals that stimulate Jim’s vivid imagination.  Moreover his nurse has strange tribal scars on her cheeks, and she is sympathetic to Jim’s fear of his condition, of his looming surgery and of his future.  Jim confesses to Bami that when he’s asleep he goes to strange places and is afraid that when the doctors operate that could send him to yet stranger places from where he may not be able to find his way back.  Jim is intelligent and sensitive enough to have a degree of self-understanding.  He is very much aware of his environment at home, such as a nearby rock called the Lion’s Head.  Bami encourages this imaginative introspection and suggests that Jim’s unconscious state might be ‘finding’ dreams, to the point of giving her small charge a painted pebble, a ‘don’t run stone.’

Hoban’s text, then, is seemingly simple but deeply suggestive, opening up the possibility of undercurrents of meaning and suppositions.  Even though Jim comes to realize that he is in a good place, is in good hands, and has a loving family there is for him a palpable inner tension common to so many children.  Fears can be subterranean.  Hoban can suggest rather than state that common human condition of seeking care and certainty and searching for a way forward in life.  So each reader is allowed to interpret Jim’s world and his personal Lion with amber eyes.  That Lion approaches Jim with Roar that is frightfully depicted in the accompanying illustrations.

Deacon’s copious and evocative illustrations form a much, much larger part of the book than the written words.  They are visionary; they stretch the imagination; they are impressionistic; some are bizarre; some are grotesque; they are chimerical; they are abstract but capture in a, sometimes, frightening way, Jim’s dream world and, perhaps, the worst fears of the reader.  The dust jacket and underneath, the cover itself express in abstract form how terrifying life can be at times for the reader.  Many of the pictures are in strip form (almost comic style) and on an early page are pieces of a surreal jigsaw suggesting, perhaps, that life can be a puzzle.  Fantastic shapes and weird sketches actually litter the pages in forms that words cannot describe.  They are always suggestive and invite the viewer to extract a meaning, such as Jim, shrouded in a red sheet, lying on a operating (?) table with a masked figure holding a saw hovering over him.  Surreal figures (nurses?) surround him.  Every page demands careful study both of the detail, African masks and animals? as ferocious figures leap across great gulfs.  Here is a book not for the faint-hearted, but for anyone prepared for a stimulating mental, emotional, and intellectual adventure.  An extraordinary book indeed.