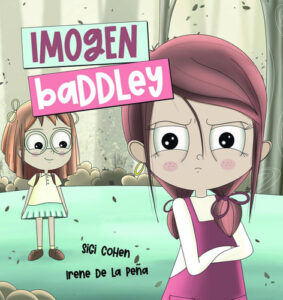 This book takes the phrase ‘turn the other cheek’ from the ‘Sermon on the Mount’ one step further. Sofia moves to a new school where her life is made difficult by the Imogen of the title. Imogen is a bully and eventually Sofia decides she has had enough. She resolves she will get her revenge but, that doesn’t involve bullying or violence in return. Instead she decides that she will turn it all back on Imogen by being overwhelmingly nice. When Imogen steals Sofia’s banana for example, Sofia promises to bring a whole bunch to school next day. Imogen doesn’t know what to make of this approach and finds it very hard to deal with. Eventually the two become friends after Imogen accepts Sofia’s invitation to her house.

The story is told in rhyme with the incidents recounted in rhyming couplets. This moves the narrative along at quite a pace and allows the author to include a wide array of bullying incidents. None of these incidents is noticed by any teacher apparently which is why Sofia must take things into her own hands.

The layout utilises double-page spreads and single page. Written text is placed in a variety places on the pages, adding interest to the layout. The illustrations are very character focussed, with the two girls dominant on each page. Each girl has slightly exaggerated eyes, a technique used to emphasise emotions.