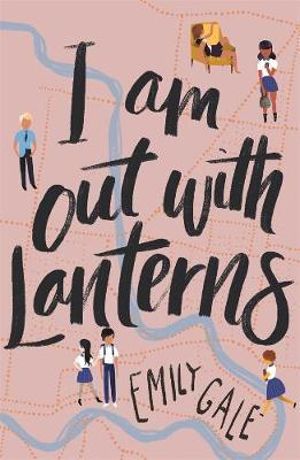 Adie has come back to her childhood house after nine years away, and can’t remember anyone. Wren’s a goth who draws a mystery girl and falls in love with her. Ben’s a private school boy whose father is pushing him past his limits. Milo’s autistic behaviours make him vulnerable to bullies while also the most loyal of friends. Juliet’s anxiety peaks when the new girl turns up. Sophie just wants to fit in with the rest of Year Seven. Hari knows who she is and is ready to come out.

I am out with Lanterns chronicles the turbulent lives of its main characters, whose stories criss-cross and intermingle, with their outcomes interdependent. Adie’s memories slowly return, with them the chance to reunite with her mother. Wren needs to let someone go in order to love another. Ben’s inability to stand up to his father leaves him choosing between his parents. Milo’s strengths shine, even in the face of being rejected by the girl he loves. Juliet re-links with her former best friend, who is now also her sister.

There’s a lot going on this book. Each character has a rich kaleidoscope of challenges, some of which overlap, as well as a whole range of parents and siblings who also have things going on in their lives. Even when the excitement of building conflict pulled me along, I sometimes lost whose chapter I was in, particularly as the first-person characterisation led to similar sounding voices, and the many inter-related issues. Hope, though, presides in these stories with those who needed to be heard most resounding loud and clear.