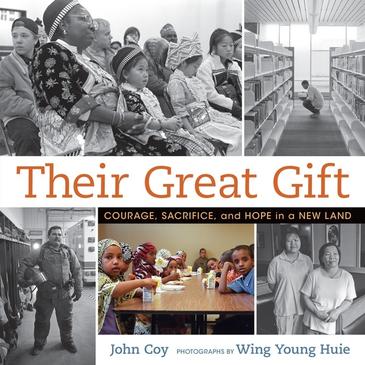 Wing Young Huie is a well-known photographer and gallery owner in the United States, specialising in photographing everyday life and people. John Coy was aware of his work and when his editor expressed interest in doing a book with Wing’s pictures, he leapt at the opportunity.

The illustrations in this book were not taken specifically for it but rather were chosen from Wing’s wide body of work spanning many years. He is the youngest of six children and the only one of his family born in the US. His parents immigrated from China and his father opened a Chinese restaurant. His parents were his first subjects when he began studying photography and his interest in the immigrant experience has continued throughout his career.

John Coy’s grandparents also came to the US from elsewhere – a mix of Polish, German, Irish and Scottish ancestry. His Polish grandmother was the one he knew best and the one who gained an education and became a teacher.

Together these two creators have produced a book celebrating the contribution that immigrants from a wide variety of different ethnic backgrounds have made to American society. The text is simple and there are no details of where the people shown have come from, although there are some clues in some of the pictures. The photographs are in both colour and black and white. The overarching message is that they all were determined to work hard, do well and never give up.

This book would be a great discussion starter in the classroom. The final sentence is “What will we do with THEIR GREAT GIFT?” The answer is not given and it is up to each reader to provide their own solution.