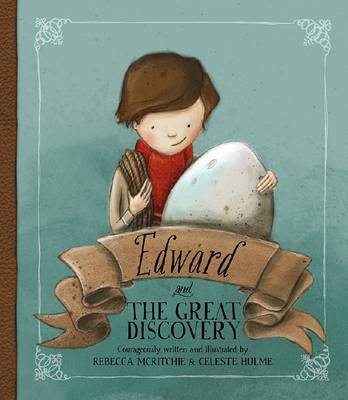 Picture books generally are becoming more sophisticated both in presentation and in content.  This book falls into the category of post-modern because of the avant-garde illustrations such as an inset of a small boy fondling a skull and many others of archaeologists in stiff poses, as though for a camera.  As well, digging and other tools used by archaeologists are also inset.  Indeed on one double spread there are some thirty frames to do with archaeology and discovery; each one stiffly stylized.

Each has relevance to the text where we learn that Edward’s parents are archaeologists and have made important discoveries.  Edward, on the other hand, had never discovered, even a fossil or a shard of bone, not even one piece of treasure – until one night Edward tripped over an egg which eventually hatches to release a bird.  This bird, surreally pictured holding an umbrella, follows Edward everywhere and obviously loves him.  Yet Edward is deeply troubled to find that the large bird can’t fly, and is grounded.  The boy sulks and mopes because of the mystery of this strange being.

To cheer himself, Edward pays a visit to the Museum of Ancient Things.  There, in a room full of birds; and with the help of a book resting on the highest shelf; Edward is delighted to be able to uncover the bird’s identity – a Dodo: a special bird indeed.  The dodo becomes Edward’s special friend.  Like his parents Edward has discovered not only a bird from ancient times, but also a true, if somewhat strange, companion.  So here is a somewhat fanciful, but gripping tale illustrated with great ingenuity to not only hold the reader’s attention, but to be thought provoking and revealing strange mysteries.  But it is the ingenuity of the carefully placed illustrations, such as the one of Edward perched on the Dodo bird with a text book and archaeological tools scattered around the pair, that confirms the reader that this is not so much fantasy, but a post-modern look back to the past that has still the power to inspire readers to think, ponder and luxuriate in what intellectual and emotional treasures there are still in our modern world, waiting to be mined by the researcher, or the adventurous reader.