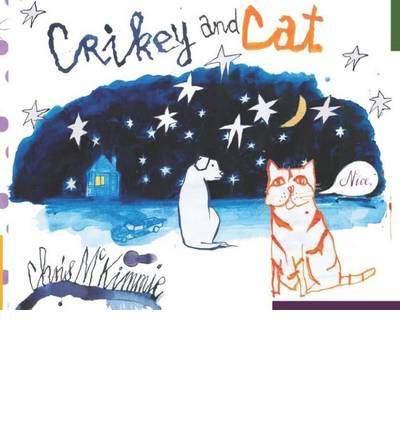 One night the protagonist looks up at the sky and notices that all the stars are gone.  So he gets in his ute with his dog Crikey and his cat, and they head to the all night hardware store.  They make new stars and put them up in the sky, only to have them blown down by a sudden storm.  However, there is help to get them back up where they belong.

The illustrations are very much in keeping with Chris McKimmie’s style.  The night sky is bold brush strokes of midnight blue, and the characters moving on this stage are often cut outs pasted on top.  The illustrations are often crude but always effective.  Even with minimal details, the reader can see that the book is set on the open plains of the outback – the big sky and flat horizons.  The text is minimal and most of the story is told through the illustrations.

I didn’t find this picture book initially appealing, however I have come to appreciate it more through re-readings.  It’s certainly a book that would evoke discussions with young audiences, allowing adult and child to share their ideas about what is happening.  Suitable for pre-school and early primary.