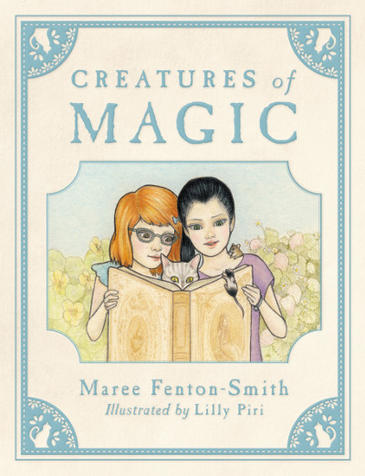 Anna is delighted when a new family, with children, moves in next door.  Things are not always as they seem, however, and Anna discovers that Violet Brown, like a number of other members of her family, is a witch, or, as her family prefers to be called, a creature of magic.  Strange things start to happen in the area where they live; hooded and sinister figures appear as does a mysterious hound and other rather strange creatures.  Rita Raton, the woman who used to live in Violet’s house pays a return visit and she too, is not quite as she seems.  She is a witch-hunter.  The attics of the two houses are adjoining which allows Anna and her sister Greta and Violet and her sister Tabitha, to join each other without their parents knowing and without having to leave the house.  Unfortunately, it also gives Rita Raton access to the Browns’ house from where she steals a book of magic.  This gives rise to the big adventure as Anna and Violet set off to try to get the book back.  Bravery is valorised as Anna and Violet undertake their mission and their younger sisters unexpectedly arrive to try to help.  Things don’t go quite to plan, of course, and the girls need help to carry out their mission.  (Female heroes are very much in evidence here.)

This is a story of friendship and understanding.  It is also a story of difference and tolerance.  Even though the Brown family is so different from their own, Anna and Greta form firm friendships with them.  The Browns need to learn new ways and develop understanding and tolerance of the differences of people who live in the ‘real’ worlds rather than the ‘other place’.  Rita Raton, the witch-hunter, on the other hand, tries to enforce a kind of conformity and is the epitome of intolerance.  Even more than simply being intolerant, Rita is a child snatcher.  Her two children are really witch children, taken from their mothers and denied any knowledge of their own culture and background.  The parallels with other cases of child-removal are clearly meant to be understood here.

The book is rather let down by the cover, which is rather insipid and seems a little ‘baby-ish’.  Although it picks up a number of aspects of the book, it is not enticing and, as we all know, we often do judge a book by its cover.  Further, the rather two-dimensional black and white illustrations don’t add to the book.  On the other hand, the cats which also form part of the cover design and are used as chapter heads are quite endearing.  MH