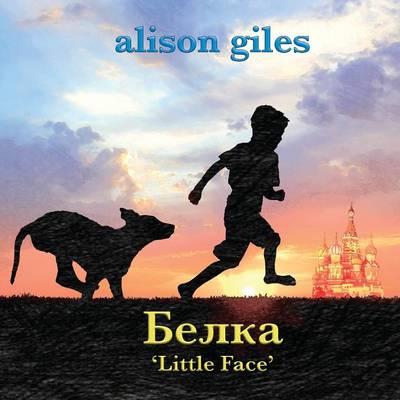 Sasha is a young Russian boy living in the Soviet Union in the 1960s.  It is a time of vast contrasts in his country – an era of great nationalistic pride fueled by the excitement of space exploration, and a time of dreadful hardship and poverty for the people of this vast land.

When Sasha is given a puppy, his loneliness and sorrow are transformed into fun and friendship, as he and his new companion share adventures, and a special closeness.  That is, until Little Face disappears, only to re-appear many months later on the front page of the newspaper as a national hero known as Belka.

In the 1960s, the Soviet Union was involved in the Space Race – a desire to be the first nation to launch a ‘manned’ spaceship.  As a precursor, animals were used to test the possibility of humans surviving space travel.  Giles expands on this in a section at the end of the book.

Belka, Little Face is the self-published work of Alison Giles who brings to life an important part of Soviet history through the eyes of a small boy.  She presents the Russian experience of a period of great change.  Giles’ use of istock website images is particularly effective in the depiction of Soviet leaders, cosmonauts, and the Russian environment and its people of this time.

This book has historical value. It is a snapshot of a time so different from contemporary society, and so familiar to those of us who grew up in the ‘space race’ era.  However, it is not an easy book to read. A revamp of the layout of the text and reduction of the number of words per page would considerably reduce the cluttered appearance of some pages; and some extra editing would sharpen the story line. This would make the book more suitable for reading aloud to children, and less overwhelming for those who are independent readers.  It is powerful subject matter, after all.