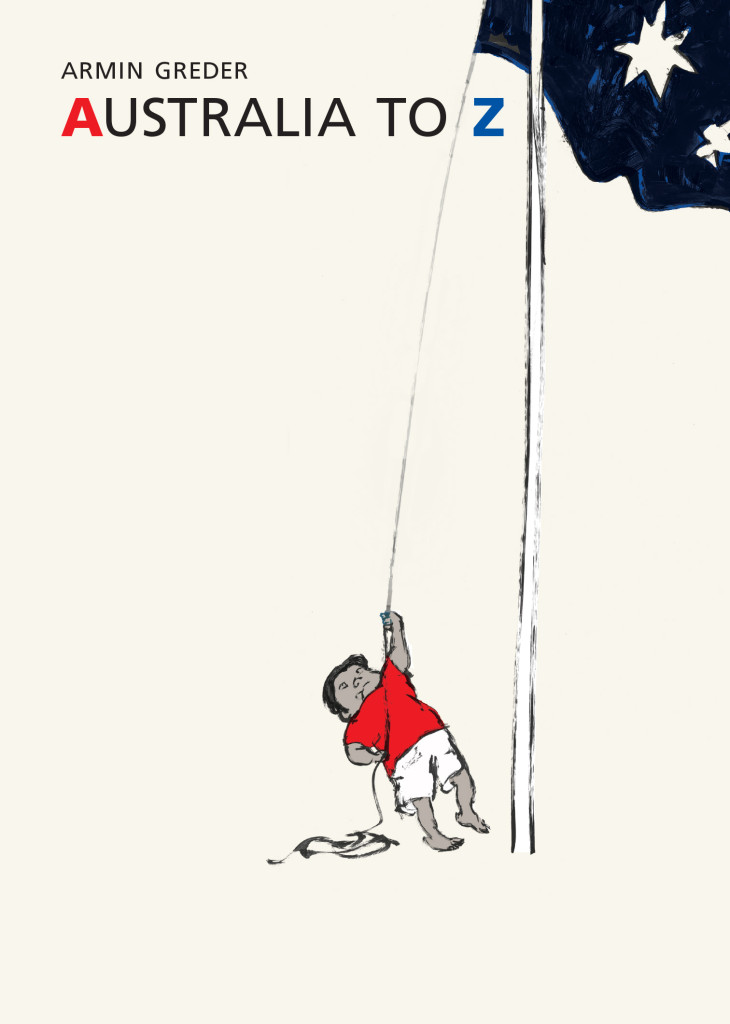 Armin Greder’s Australia to Z uses the form of an alphabet book to represent problematic aspects of Australian culture and identity. Each letter has a full page illustration in muted, minimalistic colours. The book is dark and disturbing, even grotesque. While the book is intended to offer cultural criticism, its extreme minimalism means it is open to misinterpretation. For instance, the pages “Aborigine” and “Boat People” are on the same double spread, which I assume is intended to criticise contemporary refugee policies, but the stark reproduction of these problematic terms on the opening pages means that the book appears to be replicating racist ideology.

The representation of women is another instance in which the book recreates problematic aspects of Australian culture rather than critiquing them. There are almost no women in the book –  three pages about food have drawings of women (“Calories”, “Lamington”, and “Vegemite”), and a woman lounges in a bikini in “Gold Coast”. The other 20+ characters are men. A feminist lens would strengthen the book’s intention to critique.

The image of “Nationalist” is one of the more obviously critical drawings. It features a worm’s eye view of a overweight man with a shaved head, wearing the Australian flag as a cape. He is sneering, and either cracking a tinny or pulling the pin on a grenade, depending on your interpretation. This image shows the worst of Australia, and captures the curious situation in which Australian nationalism is aligned with racism.

The book has unusually high production values for a picturebook (the textured endpapers are particularly nice), and the layout and design of the book is thoughtful and pleasing. I found some of the images enjoyable. Since moving back to Australia I’ve been struck by the prevalence of hats everywhere, so I enjoyed “Hat”. I also like “Kangaroo”, as it shows the way that most Australians experience kangaroos: as a danger on the road, not a cute furry animal.

Despite the fact that this book is published under the Allen and Unwin Children’s Imprint, this picture book isn’t for children. Young children would not understand many of the references – for instance, “Queenslander”, “Pokies” or “Ikea”. The violence of the “Xmas” turkey killing image and the dark and threatening portrait of Rupert Murdoch might cause fear in young readers. I think the book might suit teenagers, who can be open to dark and grotesque material. Teachers and librarians could use the book as a discussion prompt in History, English or Cultural Studies classes. Ultimately, however, Australia to Z is a picture book for adults.