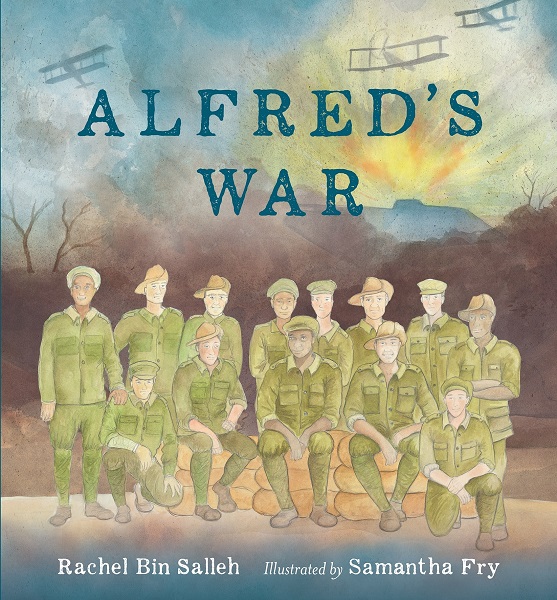 Alfred’s War reveals an aspect of Australian history many Australians are unaware of – the contribution Aboriginal and Torres Strait Islander men made in all the wars Australia has been involved in.

Told with compassion and understanding, this picture book depicts the story of Alfred, a shy and humble young Indigenous man who joins the army during World War One. Although he returns home with wounds that are both physical and psychological, he is left to deal with these on his own. Not accepted by the non-Indigenous community because of his Aboriginal background, he is forced to bear the pain alone, always hovering on the outskirts of towns and staying in the shadows every year at the Anzac Day services.

This is an important story told in a gentle, heartfelt way about a soldier whose bravery was not remembered by the nation he fought for. Consequently, he received no accolades, no benefits and no recognition for the sacrifices he made.

Using sparse, simple text Rachel Bin Salleh has written a memorable story to honour all our forgotten Indigenous soldiers. The sense of isolation, loneliness and rejection are clear as Alfred quietly suffers the injustices without resentment and continues to remember and honour his fallen mates. The attractive watercolour illustrations by Samantha Fry sensitively bring to life Alfred’s experiences as an old man living his life under the stars and, in retrospect, as a young man seeking adventure as he sailed across the sea to fight in The Great War.

Two pages of historical facts about Aboriginal and Torres Strait Islander veterans at the end of the book highlight this time in Australia’s history that needs to be acknowledged and which all Australians need to be aware of. Alfred’s War is suitable for middle to upper primary school levels and would be an excellent resource on themes of war, justice and indigenous issues.

Teachers Notes are available on the Magabala Books website.