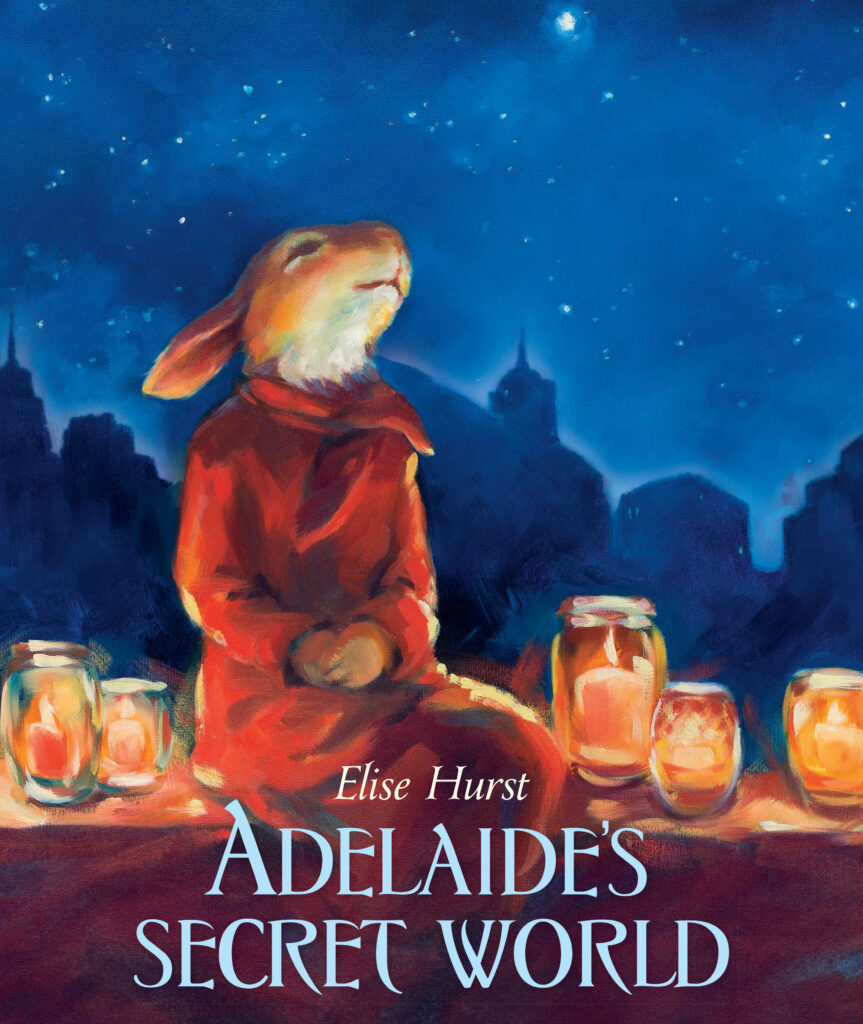 I don’t usually write reviews for Reading Time.  As Reviews Editor, my job is to gather the books sent to us by generous publishers, despatch them to our team of reviewers, then load the reviews they write up to the website.  But when Adelaide’s Secret World by Elise Hurst landed on my desk I was awestruck.  Such a beautiful and moving tale of loneliness, love and the magic of finding one who understands the workings of your soul – a soulmate – I couldn’t let it go.

Adelaide is lonely.  Her once busy life has changed, leaving her with a quiet, lone existence, observing others from the sidelines. She spends her days in a magical city, studying those around her, and her evenings recreating them through her art.  Until a stormy day leads to a chance encounter with another observer and artist – and a new outlook on life and on her city.

So many things I loved about this stunning picture book!  The beautifully soft painted illustrations – reminiscent of Matt Ottley for their magical realism, or Anne Spudvilas for the colour palette, but uniquely Elise Hurst in their execution.

The use of colour, especially the use of red.  Adelaide’s red coat makes her stand out in the grey city; accentuates her loneliness, her separation from all around her.  The red string Adelaide weaves through the city.  The same string that allows Fox to find her and pull her to him.

The touches of magic in an otherwise ordinary cityscape.  Is that an elephant disappearing around the corner?  Is that a flock of goldfish meandering along the street?  Is that a dolphin floating off down the alley?  Is that lion dancing with a lady in the city square?

The sparing text – full of meaning and emotion.   When Adelaide follows Fox home to return the sketch book he dropped while fleeing the storm: “The door opened but though her heart called out she couldn’t make a sound”.  Capturing so beautifully the feeling of coming face to face with someone with whom you feel an unspoken connection, a soulmate you’ve yet to meet.

After the meeting Adelaide is in turmoil – her world “tumbled and spun”.  The feeling of new love?  Knowing that things will never be the same again with this person in your world?  But it is not just Adelaide’s world that has changed. “And those who had once been lonely and silent … found their voices.”

Adelaide’s Secret World is inspiring.  The story celebrates the quiet observers.  It gives hope and shows the magic that can happen when one plucks up the courage to step out of the shadows and take a chance.

Personally, I also find the fact that such exquisite picture books are on the shelves of our bookstores and libraries inspiring and uplifting.  That publishers recognise the talent and skill of inspirational Australian authors/illustrators like Elise Hurst and have made such a wonderful book a reality makes my heart sing.  One only need browse the children’s section of any commercial bookstore, or the book section of any department store, to see the plethora of movie/tv tie-in and formulaic books on offer for young readers.  To have something as unique and special as Adelaide’s Secret World on offer is a credit to Allen & Unwin, to the Australian children’s literature industry and to the amazing and talented Elise Hurst.  In the words of Molly Meldrum “do yourself a favour”.  You won’t regret it.  I promise.