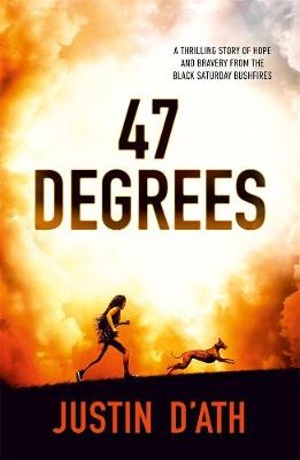 Justin D’Ath has had 28 previous books published in children’s and young-adult modes, but none quite like this personal account of the Black Saturday fires in the hills outside Melbourne on February 7 2009. These fires arrived on the back of a record high temperature, resulting in the loss of 173 lives. It was a catastrophe that likely portends more to come as our summers heat up and climate change accelerates.

Justin D’Ath’s novel, based on his own experience of losing his home (his office in cinders is one of the photographs on the end-piece of the book) to the fires, is a marvellously detailed account of a father and daughter caught up by events well out of their control. The main character and narrator of the novel is Zeelie Royle, just coming into her teenage years and beginning to understand how fallible parents can be. At the beginning of the novel, her father, Dan, is confident enough to have his plan sorted for staying and saving the family house in Flowerdale. It is a plan that is no match for the fires and winds coming at him and his daughter.

Zeelie is a character Justin D’Ath might well explore in future novels because she is gold. She is smart and full of feeling for the animals around her, ready to explore, tentatively, a new relationship that offers in the ‘refugee camp’ of displaced persons after the fires, and always a thoughtful observer.

No more happens in this novel than an almost unimaginable disaster followed by the emergence of human generosity and solidarity in the ensuing crisis. For those Melburnians who lived through the smoky days of increasingly worse news in February 2009, this will be a cathartic read, and for those who are willing to enter into the details of an experience that just might be about our future, then this is a salutary novel. Recommended for readers 11 to 16 years.