This speech was given by Robyn Sheahan-Bright at the memorial for Narelle Oliver, State Library of Queensland, Tuesday 11 October 2016. 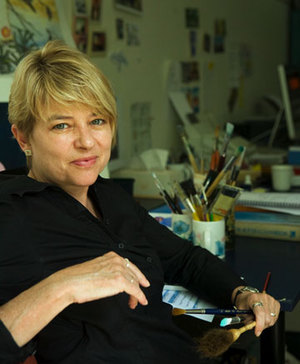 We gather here to farewell the exquisite linocut artist, and gifted writer of picture books, Narelle Oliver (1960–2016), who was beloved of her family and a wide circle of friends, and also a very dear colleague and friend to those many people passionately involved in Australian children’s literature.

Narelle was an inspirational teacher and lecturer, a dedicated environmentalist, and had a fierce intelligence. Her dry and razor-sharp wit made any conversation with her a source of shared hilarity. She conveyed a relaxed serenity which belied the intense focus she applied to any project, whether it be teaching or making art. She was a luminous beauty and had immense and yet seemingly effortless style.

Born in Toowoomba, into an artistic family, she shared with her husband, Greg, a love of the environment which unfailingly imbued all her work. Her other great passion was teaching.  After gaining a B. Ed. (Printmaking) she taught hearing-impaired children and then began to produce picture books.

I had the good fortune to meet Narelle in Toowoomba when she was working on her first book, Leaf Tail (1989), in the late 80s. Her decision to illustrate picture books in linocut (further inspired by a workshop with Irena Sibley) set her work apart, since very few picture book artists worked in that medium. It also set her on course for an inventive and demanding artistic career in which she grappled with the intense labour involved in drawing, designing and scoring linocuts, and then in printing and hand-colouring them for reproduction. As her skills grew, she experimented with collage and other techniques, to create artworks which were like nothing else produced in this medium. She was a ‘hard marker’ of her own work and would never settle for ‘good enough’; it had to be the ‘best’ and if that meant discarding an arduously detailed linocut print and starting again, then so be it.

“The brilliant light she cast will continue to burn brightly in her stunningly beautiful and innovative body of work which is a testimony to her many talents; and in the minds and hearts of the thousands of children and adults she has inspired with her exceptional teaching skills, over the last thirty-five years.”

It is not always the case that an illustrator writes words as well as she creates art, but Narelle was an extremely careful wordsmith. She often spoke of how she laboured to hone the cadence and tone of her manuscripts so that they were ‘just right’. I vividly recall Narelle working on her second picture book, High Above the Sea (1991) where that attention to detail was evident from the start. For she then began to ‘pare back’ her manuscripts and to allow the illustrations to convey more than the words themselves could say. Her teaching skills played into this perfectionism, and her knowledge of the needs of the discerning young audience she respected were paramount in all she did. 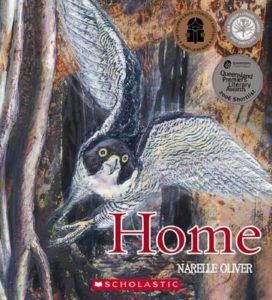 The books which followed — The Best Beak in Boonaroo Bay (1993), The Hunt (1995), Sand Swimmers (1999), Mermaids Most Amazing (2001), The Very Blue Thingamijig (2003), Dancing the Boom Cha Cha Boogie (2005), Fox and Fine Feathers (2009), Baby Bilby, Where do you Sleep? (2011), Twilight Hunt (2007) and Don’t Let a Spoonbill in the Kitchen! (2103) — were each remarkably crafted works which showed the steady progression in her craft. They were often cumulative tales – allegories or fables with a contemporary twist.  Above all, she wanted to create interesting and entertaining fiction for children which contained non-fiction facts.

Her interest in studying the lesser-known creatures in our ecological fauna, and in detailing the landscapes they inhabited, ensured that her works conveyed knowledge not easily found elsewhere. Her integrity in this pursuit of creating art whilst imparting information was instrumental in creating a body of work which is unique. 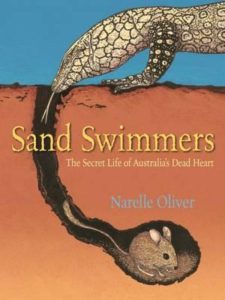 Her arts practice extended to collaborations such as Mark Svendsen’s The Bunyip and the Night (1994) and to several public art and other commissions such as the interior design of the Children’s Lounge at the Brisbane Square Library (2007) inspired by her book Home.

Narelle was a founding member and Vice-President for some time, of Books Links (Qld), which has done so much to profile her fellow creators since 2004, and whose members, past and present, are standing by my side here today. She played a major public role as educator, and was renowned for those skills. She worked closely with the Queensland Writers Centre since it was established, and with the State Library of Queensland. She was a peripatetic workshop leader – a repeat guest at many literary festivals throughout Australia, an ‘artist in residence’ in many public and private institutions, a guest artist at writers’ camps, a visiting lecturer, and in all these commitments she shared her knowledge wisely and generously. She was a much-loved ‘guest author’, not only for her inventive talents, but also for her ever-present sense of humour, indefatigable energy, and patience with her students. The works which resulted from her tutelage were inevitably stunning, whether the participants were six or sixty. Since such work also represented her livelihood, she would often embark on tours which were very taxing. Narelle would later regale friends with hilarious stories of arduously hauling her portfolios and art equipment across country, sometimes on public transport, to meet the many engagements she took on so tirelessly. These journeys would inevitably include some entertaining incident which would occur along the way which she’d relish detailing in that deliciously deadpan manner she had, which would leave her listeners in stitches. 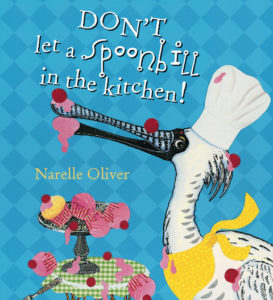 Fittingly, her most recent book Don’t Let a Spoonbill in the Kitchen! was launched by Dame Quentin Bryce AD, CVO, in 2013 at the Brisbane City Council library, which had so often provided the setting for her work. One of her last professional meetings was with Jenny Stubbs to discuss a major exhibition of her work to be curated and exhibited next year at the Story Arts Festival in Ipswich, with the assistance of other friends and colleagues who respected her work so greatly. Narelle’s book Rock Pool Secrets is due for release, and I remember how excited she was to be offered a contract to work on a book with ‘lift-the flaps’ which added another dimension to her art. She was also working on a further project, about Cecil.

We farewell Narelle, knowing that she will continue to occupy a major place in the world of books. We mourn the loss of an extraordinary friend, and feel privileged to have joined her on her artistic journey. The brilliant light she cast will continue to burn brightly in her stunningly beautiful and innovative body of work which is a testimony to her many talents; and in the minds and hearts of the thousands of children and adults she has inspired with her exceptional teaching skills, over the last thirty-five years. 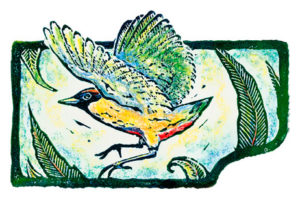 “Vale Narelle: we will think of the tawny frogmouth, the spoonbill, the osprey, the peregrine falcon, and all manner of birds, as they soar over us in the skies lit by your incandescent light.”