The following is a tribute to the amazing Kim Gamble, as given at his funeral by Anna Fienberg: 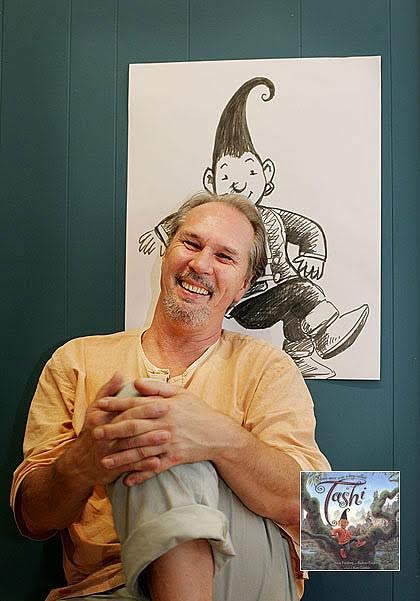 For Kim – a tribute by Anna Fienberg

As a person and as an artist, Kim had magic. You felt it in the way he painted light, taught children to see, in the shimmer of his charisma. It was present in his extraordinary generosity, his wild humour, his loyal, unwavering love for family, friends, the mud brick home he built in the bush, for rivers, gardens, books, cicadas, geckos, magpies, owls, moonlight . . . in his way of seeing.

Once you had seen something through Kim’s eyes you couldn’t see it any other way. I will always look at twilight and see him laying down the colours – a ribbon of white, pale lemon, pale pink, orange maybe, green, rising up into darker blues . . .

Over twenty years, in over a thousand schools, he showed children how to make chalk pastels glow against a dark background. And each time I would wait, holding my breath with the children, to see the world appear before us – the time when it’s not night or day but something in between, when fairies emerge or ghosts or monsters . . .

Kim’s use of light was magic.

‘How do you draw like that?’ children asked a thousand times, even though they’d just seen it happen before their eyes. It was like watching magic.

‘You’ve got to find your light source,’ he’d explain, ‘then make sure it touches everything in its path.’

For Kim, the first reading of a story was the most important. He’d go somewhere quiet and the images that came to him were those that endured.

As if anyone could just look into their imagination, then paint it!

Because he thought it was normal to see giraffes flaming on top of a perfectly rendered Lindfield Station; kookaburras busy making mud bricks for a waterhole; boats sailing gracefully through blue air. You saw it behind your eyes, and you brought it to the surface.

Kim was maybe the most humble person I ever met. Sometimes it even got annoying.

It annoyed George Lindsay, a good friend of his at school. Kim and George were walking home one day, and Kim asked him, ‘If there was one thing you didn’t like about me, what would it be?’

‘Nothing! Why don’t you go stick your head up a dead bear’s bum?’

‘Oh for chrissake, if anything you are just too POLITE!!’

That polite little boy became Horrendo in the next book.

Kim had great compassion, and tenderness for people in trouble. Sometimes too much tenderness, too much politeness!

I remember the time he loaned his car to a rather dodgy type who forgot to give it back. Days went past. On his journey to try to recover it, Kim ended up having to look after the man’s dog, his ex wife who was depressed, and pay their rent. It took him a while to get back home, to Manly.

At a party, so often I’d try to introduce him to people – interesting, exciting people who he’d have heaps in common with – but he’d always say, “Yeah sure, in a moment,’’ and hunt out instead the person who was sitting alone, the elderly one, anyone left out. “Can I get you a drink, something to eat?” And he’d ask endless questions about their lives. And so the evening would pass . . .

Maybe that’s why he connected so strongly with Tashi – the little boy who was always looking after his family, his village, trying to sort out the right and honourable thing to do. And Kim brought extra magic to help him on his way, putting him in that Santa Claus suit with surprises in his pockets, and the question mark hair . . .

Kim had a huge empathy for children. And such a vivid memory of his own childhood. Part of him would always be roaming along the riverbank or jumping off a rope into the water, smoking cigarettes in the caves, taking apart his air rifle so many times he could do it with his eyes closed.

Once we were at the Sherman Galleries. I was reading a story, as we did at schools, and Kim was drawing a scene from the story with chalk pastels. There were a lot of people – maybe a hundred children and their parents. We had just started when a little boy suddenly put up his hand, waving it desperately as if in agony. A burst appendix perhaps, I worried, at the very least he must be busting to pee . . .

Usually we ignored hands raised at the start saying, “We’ll answer questions at the end,’’ but we couldn’t ignore the desperation in this boy’s face.

‘Well,’ said the boy, wringing his hands, ‘my mother’s left me here and I don’t even know if I’ll like this. It looks boring! What will I do if I get bored, what will I do?’ He said it as if he was going to be mauled by tigers.

I was speechless. So embarrassing. How do you convince a child that you’re going to be fascinating? I guess I was caught up with my own ego.

I mumbled something incoherent and sweated. But Kim looked at him sombrely as if he completely understood his dilemma. He said, ‘Watch this carefully, and you will be able to do it yourself, later’ . . . and he began quietly, methodically laying down the colours. When he came to doing the star at the top – a white cross teased out with his finger tips to glow against a black sky, the boy was shaken. Mesmerised. Hardly breathing. Thank god. And when his mother came to collect him, he refused to leave. ‘Do it again,’ he wailed at Kim. 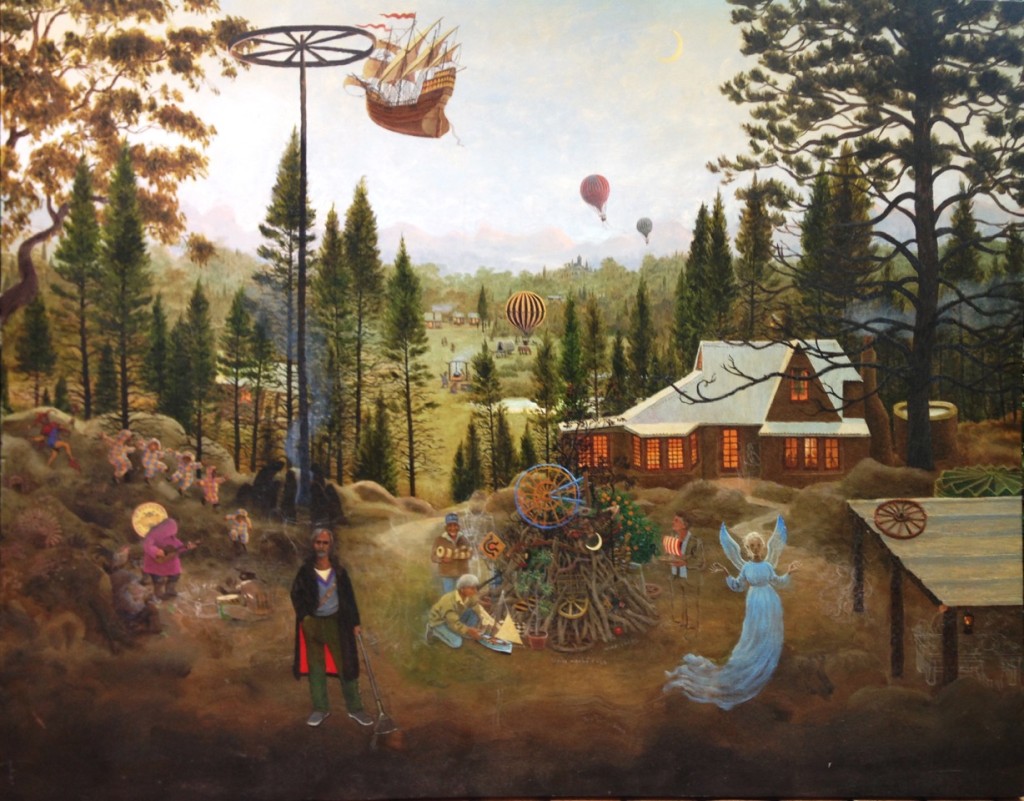 The other day the family and I were sitting around the table, talking about Kim. We all agreed that he never had a real idea of his own power as a person and an artist. Wasn’t it a bloody shame, I thought, that he didn’t enjoy that aspect of his gifts more? Even though he was urged so often to have an exhibition of his art – separate from his work as an illustrator – he always refused. ‘I paint for the people I love,’ he said, ‘for the love of painting, that’s all.’ When he was in his twenties, he did have one exhibition with Frank, his great friend. All of Kim’s paintings sold, but he shrugged it off saying, ‘Aw, I just paint pretty.’

Ugh, typical! He didn’t just paint pretty. He painted wild and deep – that’s why it’s so beautiful. The poet Robert Graves said to the painter John Olsen, ‘You can paint pretty pictures all you want. But without metaphor, you have nothing.’

For Kim, finding metaphor was effortless, every painting was a story. It went with his way of seeing – it was there, first up, in his imagination, in the way he looked at the world.

‘I believe in shadows,’ he wrote, ‘and I believe in light. Imagination needs both. I hope, as an illustrator, I can validate them equally, but my bias remains with light.’

I loved going to the art gallery with Kim. What an amazing privilege that was, what an education. I remember once looking at a Cezanne painting and feeling a real connection. I hadn’t felt much for Cezanne before. But with this one, my eye kept coming back to a part in the bottom corner where the paint had left the brush, and the canvas showed through. It looked unfinished! I pointed that out to Kim – what happened there I asked, did he not have time to finish? ‘Nah,’ said Kim, ‘that’s where he’s letting you in.’

There’s a lot of things I wish, but . . . I wish Kim had appreciated his own self a little more. The amazing person he was. We used to laugh at his fantasy of what he’d say when interviewers asked him about himself. ‘Well, I’m a friendly, slightly overweight children’s book illustrator,’ he’d reply.

I used to think one day he’d strip off this benign exterior and emerge from a telephone box like Clark Kent, the Superman that he was of the art world.

Kim never got over the wonder of a moonrise, or the dapple of sun and shade. His favourite quote, he told me just a fortnight ago, was Thomas Hardy’s: ‘The road to a true philosophy of life seems to lie in humbly recording the diverse readings of its phenomena.’

And that is what he did every day, as truly as he could.

Nature gave him comfort I think as well as inspiration. I know whenever we had an awkward, difficult conversation he’d search around for something beautiful to look at, one fine thing to rest his eyes on to give him courage to go on. Even in the middle of a shopping mall – his idea of hell – he’d find something a bit wonderful.

And in these last months, something wonderful happened. Accepting without protest his fate, he calmly went about making beauty. In his relationships, and in his art.

He has done perhaps the most beautiful work of his career. We have had our most loving conversations. Spoken the most heartfelt truths.

I feel he has been heroically brave, but I know at that he would protest. Because of his infernal humility.

I used to say to him, when talking about death, ‘God I hate all this dying business. There ought to be a better system.’

But he didn’t agree . . . He hated instead all this need to make money business, this keeping to deadlines business, shopping malls and ugly streetscapes and bloody roads without signs business.

We agreed that there ought to be just art and love.

And that’s what he paired his life down to in these last months.

I feel a terrible emptiness approaching when I look over the cliff of his not being here.

But I’m going to try to remember that we will always have the art and the love, the path through the bush up to the house, the hot air balloon floating amongst the clouds, the warm yellow light in the windows where someone is always at home, keeping the fire going.