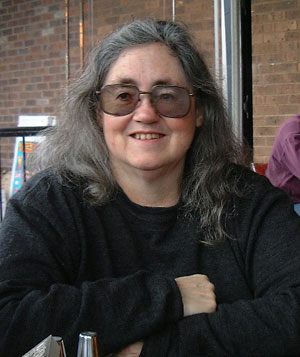 The Children’s Book Council of Australia was an important part of Jo’s life. She occupied many roles and positions, each with characteristic commitment. Jo was instrumental in many endeavours for both the Victorian Branch of the CBCA and also for the national body of CBCA.

In Victoria, Jo served as a President of the Victorian Branch from 1992-1993, and several terms as a Vice-President in recent years. She was the inaugural convenor of the Leila St John Award for outstanding service to children’s literature in Victoria, first awarded in 1999. She was also instrumental in the Nan Chauncy award, given from 1983, to a person for outstanding contribution to the field of Australian children’s literature. For many ears, Jo astutely held carriage of this major award, ensuring that processes were workable and professional.

Jo also judged children’s books in various ways. She served two terms as the Victorian Judge for the national CBCA Book Awards in 1986-1987 and 1998-1999. Today, it is now common for State and Territory judges to give public talks, but Jo Goodman was one of the first Judges to speak publically about the judging process, the Short List and all entries.

Her experience as a Judge led her to serve as CBCA Awards Coordinator where she applied her characteristic eye for detail and gave generous support to the judges. From 1993 to 2013, she served on the CBCA Awards Handbook Committee. This publication continues to provide public information about the awards for authors, illustrators, publishers and the general public.

Readers yearn for concise, knowledgeable and well argued articles and reviews on Australian children’s books. This was Jo’s forte. She began reviewing for Reading Time, the CBCA’s national reviewing outlet in 1988. She was also a regular reviewer and writer for Magpies: Talking About Books for Children. For Jo, such activities were about inspiring readers.

Jo was an author and editor as well. The CBCA commissioned two collections of short stories by CBCA award winners including Dream Time (1989) and Into the Future (1991). Jo and co-editors Toss Gascoigne and Margot Hillel produced these to a high standard. Into the Future was named a White Ravens book by the International Youth Library in Munich in 1993.

In Jo’s early career as a teacher librarian, she noticed that little material was available to promote reading for pleasure. Along with her colleagues Andrew Taylor  & Gary Shaw, Jo published RIB-IT in 1983. RIB-IT became a promotional campaign to encourage reading for pleasure and was widely used in school and public libraries across Australia.

In 2010, Jo was presented, along with John Cohen, with a citation from the CBCA national body for ‘long and dedicated service’. The citation (Reading Time vol 54 no 4, pp7-8, 2010) stated that both Jo Goodman and John Cohen ‘have had a profound influence on the development of the organisation and their wise counsel is often called upon at AGMs, as their collective corporate knowledge is formidable.’

Jo Goodman always tackled large and small tasks with equal vigor and excitement. She has changed the landscape of Australian children’s literature for the better. Her legacy will continue and all Australians are the beneficiaries.