Brisbane’s Renaissance man, Peter Taylor shares some of his writing and illustrating and educating stories.

If you do a Google search for ‘author Peter Taylor’, you will find there are several of us.  I’m one of those still alive, and just for the record, my new picture book is Once a Creepy Crocodile illustrated by Nina Rycroft and published by The Five Mile Press.  This is a photo of me with CBCA Qld’s 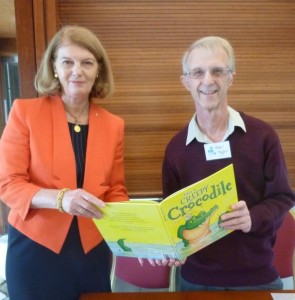 former Patron, the Governor of Queensland, Her Excellency, the Hon. Penelope Wensley AC, when the book was first shown to the public on the CBCA stand at Government House Open Day.  I’ve also had four books on calligraphy published for older children and adults, co-authored 101 Things to Do Before You Grow Up and many years ago I self-published a picture book called Kangaroo’s visitor gets a Surprise that a publisher later made into an eBook.  If you discover one of these on an internet site that lists ‘books by the same author’, I have not written business titles, short stories, political commentary, been a lighthouse keeper or won the PEN/Faulkner Award.

I was way too late to get a Word Press identity in any combination of Peter and Taylor.  My parents attempted to solve such problems by giving me a middle name of Ernest, but it doesn’t solve them all and I wish I hadn’t chosen Peterern as it reminds me of Tea Urn, my nickname when I taught science and art in high schools.

Allen and Unwin, my first publisher, edited books by two of us Peter Taylors at the same time, and though I used Peter E Taylor, we still received each other’s mail.  My grandfather was named Ernest Taylor after his father’s best friend, Ernest Hartley Coleridge – Samuel Taylor Coleridge’s grandson (the Taylor in their names is a coincidence – we’re not related).

My great-grandfather owned a letterpress printing business, was a poet and compiled The Folk-speech of South Lancashire.  I never met him, but when I was two years old, instead of sharing picture books, my grandparents would show me his suitcase full of prints by Rowlandson, Cruickshank and other engravers, and read me 18th century books and puns in 1840’s Punch Almanaks.  I’m sure these were the stimulus for my book-lust and love of words, writing and illustrating.

My great-grandfather’s treasures are shelved by my desk, and I feel h 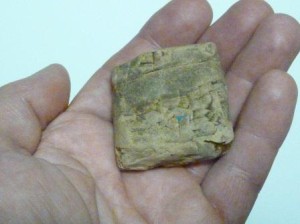 is presence.  I’ve added to the collection and it’s now a joy to take this to schools to give children (and adults) a ‘Hands-on Experience of the History of Books and Writing over 4000 Years’ – attendees hold an 1800BC cuneiform sales docket, turn pages of 13th century Gregorian chant, enjoy Victorian children’s books and many more delights – no white gloves.

I trained in England as an ecologist and educator, studied calligraphy, illumination and bookbinding and was employed as a museum curator, a nature reserve warden and as a teacher.  During a job-swap with an Australian in 1979, I taught Queensland’s first calligraphy classes at weekends, which helped me to immigrate in 1982 as a freelance artist, then needed by Australia, and not teachers.

When I applied for a mortgage, however, the bank manager preferred a return to teaching.  Gaining a position was easy, but I left it in 1987 to write The Australian Manual of Calligraphy for A&U and to start my Peter Taylor’s Calligraphics business, and I’ve worked from home ever since.

When my children were small, I’d sit on their beds and make up stories which were often so boring that I’d fall asleep while telling them, and the children would still be wide awake, so my wife encouraged me to enrol in the ACJ’s Professional Children’s Writing course.  I completed that in 1999, followed by a mentorship with Marg McAlister.  The world of children’s books has been a major part of my life ever since, including years as CBCA Qld Secretary and currently its Newsletter Editor, Coordinator of SCBWI Queensland (a branch of the 25,000 member strong international Society of Children’s Book Writers and Illustrators) and assisting emerging writers in Write Links (an initiative of Book Links Qld Inc.  that has a goal to establish a Children’s Literature Centre in Brisbane) …and attending conferences and events.

Once a Creepy Crocodile was started at the 2009 Ipswich Festival of Children’s Literature in Jan Ormerod’s workshop.  She read her book If You’re Happy and You Know It! and then said, ‘Now choose any familiar non-copyright nursery rhyme or song and likewise write fresh words to the same rhythm.  Find a partner or two.  After 15 minutes, you will read out your effort.  Go!’

I paired with Julie Nickerson (author of Pippa’s Perfect Ponytail).  ‘‘Ring o’roses’? ‘Hickory-Dickory’? ‘Waltzing Matilda’?’  ‘Yes!!!’ (I’m not certain which of us suggested ‘Waltzing Matilda’.)  ‘Once a… a…’

Everyone applauded when Julie shared our verses, and the next morning I emailed her and she generously agreed that I could develop it on my own.  But it’s really partly hers, also with input from writers in my networks.

When the story was pitched to a panel of editors and agents in Bologna, several questioned whether American children would be interested in brolgas, and suggested a replacement familiar creature, a mouse or …coyote.  Helen Chamberlin from Windy Hollow Books later advised adding extra verses.  And then it was loved by Karen Tayleur, Managing Editor of The Five Mile Press, when she appraised it at the 2012 Sydney SCBWI Conference …and I thrust a copy into the hand of Nina Rycroft, one of my all-time favourite illustrators, and asked her if she’d consider illustrating if The Five Mile Press agreed.

Their sales team requested including a CD of the text being sung, but Australia had paid a fee to a US copyright-holder when Waltzing Matilda was sung at the Atlanta Olympics.  Was the word rhythm copyright in Australia, or the tune if it was recorded?  Apparently this was solved for Australia, and the story was accepted for publication in February 2011, sadly just two months after Jan had died – she’d closely followed its rocky journey.

Rusty Berther sings and plays it on the CD, which also includes his rendition of Banjo Paterson’s original version, which is a superb addition introducing young children to this important contribution to our heritage and national identity.

Some of the characters are lesser-known Australian animals, even to Australians.  True facts about them can be found on my website, outlines to print on thin card that can then be cut out and attached to paddle-pop sticks to act out the story (or to make up a new one) … plus the music score to play or sing.  Hopefully I’ll discover a YouTube of a school choir or band performance!

Other picture books texts are at various stages of completion.  I’ve started a calligraphic alphabet book and whacky verses with illuminated manuscript-style illustrations, a YA is on the back burner and some non-fiction sample chapters have been completed.  (Did you know that Freddie Lane, Australia’s first Olympic swimming champion (Paris Olympics of 1900) won gold and bronze for the same race?  We are distantly related and I have the photos.)

A mid-grade story in progress was started after reading that the home of Joe Bugner, the past Australian Heavyweight Boxing Champion, was burgled while he was away at a fight.  Then, when I was traveling home from the UK, the check-in Clerk at Heathrow Airport asked what I did for a living.  I told him I was writing a children’s story and how it originated.  He smiled.  I looked at his name badge.  He was James Bugner, Joe’s son – and the plot suddenly became clearer.

None of these may be published, but A Tart Tale definitely will be, though I’m not sure when.  It’s been written by Jennifer Poulter, author of Mending Lucille (RT V52 N4 p21), and my contribution is an illuminated border and writing the words in a different calligraphy style for each character.  It re-tells the Queen of Hearts and her tarts from the perspective of the Knave, the Priest, the Lady in Waiting… It’s being wonderfully illustrated in Scotland by Mandy Sinclair, an artist for their National Trust.  A US publisher has made us an offer, but before we accept it we’re hoping to find the work a home with an Australian publisher who markets more widely. 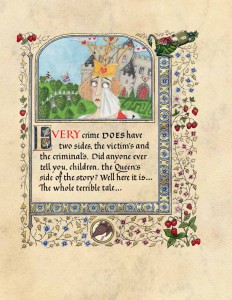