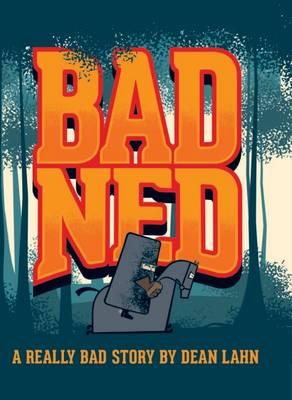 This is a cleverly packaged, humorous book referencing Australian legends like Ned Kelly and Waltzing Matilda in a story about a young farm boy’s antics and imagination.

The narrative begins by announcing that “Ned was a bushranger” and we see a young boy playing bushranger by tying up his toys to a post, and stealing cupcakes. He makes some armour from cardboard boxes and then his imagination takes over, and the illustrations begin to show how Ned sees himself in his play – dark escapades riding his armoured steed.

Old-Western style font (as in a ‘Wanted’ poster) sets the bushranger tone and dominates most pages.  The computer generated big, bold and blocky illustrations are often squeezed around the text or have the text emblazoned over them. With lots of solid slabs of colour, this book makes a bold visual statement.

The playful juxtaposition of serious text with innocent illustrations sets the scene for humour at the start of the book and it is followed up with ‘in’ jokes within both the visual and textual narrative that will readily engage children in their early school years. Bad Ned would be perfect for use in the classroom where teachers can fully draw out the references to iconic Aussie legends.

I would highly recommend this book given that the unusual style and formatting of its comic action-adventure story has the potential to engage reluctant readers, especially boys, and interest them in topics of Australian history.