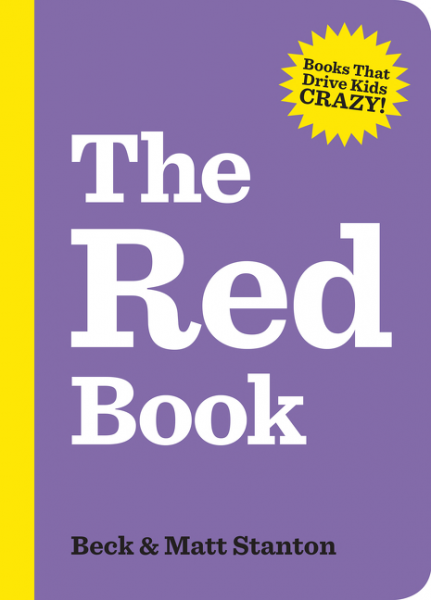 This book relies on a play on words – read and red. The cover sets the scene of the concept as it is purple with a yellow spine, with the title in white – no red to be seen. At the top right-hand corner there is a yellow emblem with the words ‘Books that Drive Kids Crazy!’ The book begins with a direct address to the reader, asking that they read the book together and asking the colour of a number of different-coloured images. The next page declares that each of them is actually red and that by the end of the book the reader will know that the book too is red.

Each double-page spread has a creature on the right and words referring to it on the left. The left-hand pages are coloured with the text in white. Whatever the colour of the creature, the writing says it is red and has additional smaller text at the bottom of the page which tries to explain the contradiction or, sometimes, has an additional joke. The very last page declares that the book is definitely red ‘because we just read it’.

This is a book which requires a child to have a reasonably sophisticated understanding of how words work and be able to see the joke of the play on words. It also needs a firm grasp of colours so that they are clear that green is not really red (and it wouldn’t work for a reader who is green/red colour-blind). I suspect that it would be best shared with an adult for the first reading as it might need some explanation.