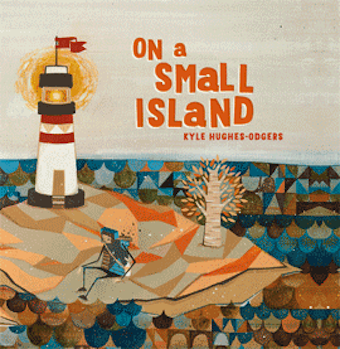 ‘On a small island, in a large sea, Ari lives alone.’ He collects flotsam and jetsam and gazes at the heavily laden ships passing by, and at the far horizon where he knows there is a great land.  When one of the large ships stops, its captain tells stories of the far land, its buildings, people and artifacts.  Ari longs to see these wonders and feels even more isolated on his small island.  When an unusual object washes up he is inspired to begin building, using his stores of salvage, and eventually achieves a marvellous edifice of his own.  Ships stop so people can visit and view Ari’s masterpiece and Ari now feels lucky ‘surrounded by remarkable things and interesting friends’.

Using acrylic paints on linen, Perth visual artist Kyle Hughes-Odgers has created an exotically beautiful picture book with an intriguing Mediterranean flavour.  The sea looks like Byzantine mosaics in all shades of blue and gold.  Ships are like top heavy galleons, and Ari’s eccentric buildings recall Heath Robinson creations.  The people are pleasant-faced, stick-limbed cartoon constructs.  He deals with themes of isolation, loneliness, friendship, imagination, creativity and recycling.  The language is elegant and rhythmical and the vocabulary excellent.  Teaching Notes on Fremantle Press website suggest a K – Yr4 audience, but I feel a much wider readership is appropriate, because of the sophistication of the artwork and language and the universality of the themes.  Highly recommended.