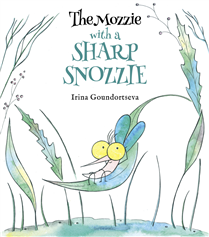 A mosquito admires some butterflies and works up the courage to ask to join their group, but is rejected as being ugly and boring. Feeling dejected, the mosquito uses a flower to disguise itself and is then accepted by the haughty butterflies. Danger arises when the butterflies are captured by a collector, but the mosquito saves the day by biting the human’s hand and the group manage to escape. Ultimately, the mosquito decides to forsake the company of the butterflies, and is happier just being itself.

Irina Goundortseva is to be congratulated for making an irritating, biting insect like a mosquito the endearing hero of a picture book. The illustrations are large and colourful with a simple, clear text placed on a white background for easy reading. Clever use of changes in font size and boldness emphasize important moments in the story while many pages rely on the illustrations alone to carry the tale. Suitable for children of  early primary school age, this gender neutral book has a strong message about being faithful to yourself and recognising your unique skills to find and accept your own identity.