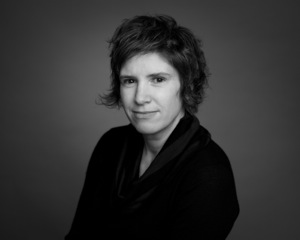 Nova Weetman tells Reading Time how plotting helped her up the ante in her suspenseful début Older Reader novel, The Haunting of Lily Frost.  She talks about her own brushes with past lives and haunting and how her fear of death helped her write what is an edge of your seat read…

I’ve always written contemporary, real-world stories, and I wanted to try to tell a story that sat between two genres.  The Haunting of Lily Frost is part coming-of-age and part ghost story.  Having the supernatural elements meant that hopefully I could take the simple story of a girl moving to a country town in a new direction.  It was also my chance to write a book that was heavily plotted, and driven by action more than intention.  Actually that was the hardest part for me.  Usually I write simple character stories, but this book needed to deliver as a ghost story, so things had to happen.  The ghost had to be frightening.  Lily Frost had to be afraid.  And the haunting had to escalate.  This all required plotting and replotting to get it right.

People sometimes forget that at the heart of a ghost story is death.  It may be a genre story but it’s still essentially about dying.  Who was the ghost when they were alive?  How did they die?  And why can’t they let go?  All these questions have to be considered.  I think one of the best things about writing a ghost story for young adults is that it allows you to explore death without it being a book about death.

I’ve always been intrigued by the openness of children to ghost stories and spirits.  When my daughter was three she was convinced she was once a nurse married to a man called Jack who lived in Naughtree Fields.  She told us about the house she’d once lived in.  And pointed out the place she’d once worked – a hotel that used to be a hospital well before she was born.  It was chilling.  Even for someone like me, who wasn’t spiritual in any way, I saw how strongly she believed.  So I wanted to write a story about a protagonist who does come to believe in the ghost that’s haunting her.  And because she believes then we do too.

I also wanted to raise the idea that perhaps Lily’s ghost is somehow helping her transition to her new life.  While I was writing this book, my mum was dying of cancer.  My children were incredibly close to her, and my son who was only four at the time, became convinced that she’d returned to him in the body of a bird who’d suddenly appeared in our backyard.  For months afterwards he’d speak to the bird and show it things, talking to it like it was his ‘nanna’.  For him, this process made it easier to understand her death, and to accept that she was no longer there.  He needed to believe he was talking to her through the bird, and it helped him let go.

Mum’s death changed something in me too.  I became terrified of dying.  And I think sub-consciously when I was writing the book; it was partly a way of exploring my own fear of dying suddenly.  By creating the ghost of a teenage girl who’d died recently and was similar in many ways to the protagonist, I could write about the fear of death without that being explicit.  Lily begins the book talking about when she almost drowned as a young child.  This is an important thematic in the book.  I wanted to introduce how frightening the idea of dying is, without alienating young adult readers.

Because the ghost in the book never speaks or really interacts, it’s up to Lily to decipher what she wants and means.  It’s sort of how I felt as a teenager.  Like I was always trying to work out what people were really saying.  And in many ways it’s also how I felt after mum died.  Like there was a whole piece of the puzzle that I just didn’t understand.

Writing this now, I realise how much of the book is a conversation with whatever I was experiencing at the time.  It’s about death, loss, change and identity.  And that was what I was living through.  Wondering who I was without a mother.  And reeling from the enormous change in my world.  So without even understanding it, I was processing all sorts of things that found their way into Lily Frost’s world.  While Lily isn’t grieving the death of someone she loves, she is mourning her old life.  This is important.  The idea that grief can take many forms and that change can precipitate a period of mourning.

But what I love about Lily Frost as a character is that she struggles with change, questions it, tries to avoid it, but finally succumbs to it and learns something about herself along the way.  I think that’s all most of us can ever hope for.

The Edge of Thirteen