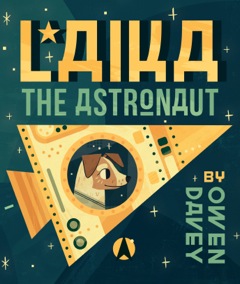 Perhaps you are too young to remember how the world looked up in November 1957 to watch the Russian Sputnik like a bright star cross the sky.  It was carrying a little dog, Laika, the first animal in space.  We know that the rocket malfunctioned, and Laika was lost to the world.  We all shed a few tears for the little hero, a victim of human curiosity, because we knew that she had died, alone and, no doubt, afraid.

Owen Davey has given little Laika a happier ending, in which she finds a loving four-fingered family to care for her.  Should children be shielded from the ugly truth of Laika’s demise?  Perhaps in today’s world we would not be so careless with an animal’s life.  Perhaps there are other sentient beings out there with more compassion for a species different from their own.  Whatever you think, Davey’s arresting, imaginative, sharp and quite beautiful illustrations give a powerful life to the story of Laika, as she wanders the streets of Moscow, is captured and trained, and sets off on her remarkable flight.