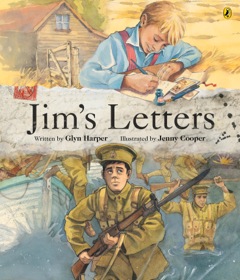 The cover illustration is a powerful introduction to this moving story of two brothers and the impact of war.  In the top third there is an image (non-glossy) of a young blond lad writing letters with an image of a farm cottage in the background.  Below this is a glossy image of a landing (possibly Gallipoli) where, in the central foreground, there is a young dark-haired soldier, holding his bayonet mounted gun, looking upwards though moving forwards.  Though we may guess who is writing to whom, which one is Jim?

The endpapers certainly set the scene of the First World War with its images of stamps, postage dates and the official imprints of the censorship authorities.  Home and away is very much the focus with the letters crossing the boundaries of time and place.  As one could expect, it is not a happily ever after story.

This large format book is a wonderful one to use as a read aloud as the text is simple and brief.  But it is the cards, letters and the illustrations that tell the story.  The colour tends to a sepia tone that not only resonates with the evocation of place/space but also hints at period.  There is also an excellent use of colour contrast and a subtle use of collage to give a sense of realism.  This is further enhanced by the peritext at the end where an account of the Gallipoli Campaign is detailed and there is a visual blend of modernity and passing time.  Boundaries of time and place are crossed during ANZAC Day and the text reiterates this both in terms of the story and the book-as-object.  Highly recommended.  John McKenzie