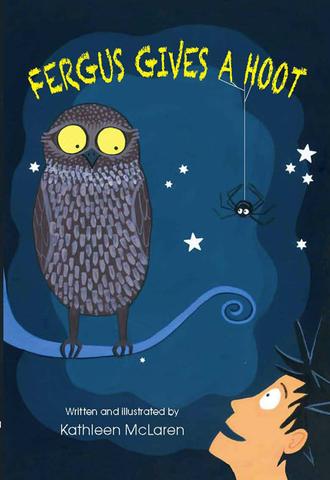 Fergus Gives a Hoot tells the story of Fergus Fleegelbaum, who lives with his family near the forest. His love of the animals that live there prompts him to write to the Minister for Roads and Highways, asking for more to be done to help stop animals being killed or hurt on the roads. When he doesn’t hear back, a group of animals calls on Fergus to help them with their own plan to reach out to the Minister.

McLaren has done an admirable job of writing and illustrating this book, using it to discuss a worthwhile and important issue. It may have been more powerful to create a narrative where a dramatic incident changes the Minister’s mind, rather than the abstract Caring Seed device. This aside, the story would allow for much discussion of the plight of the animals and the way in which Fergus and his friends tackle the issue. The newspaper page is an obvious talking point for teachers and students.

There are some very funny and charming moments crafted by McLaren, such as when the valuable Caring Seed ends up in the soup of an unsuspecting diner, or when Spider invokes the motto of his Scottish ancestor, Robert the Spider. The painterly illustrations are amusing and support the story well.