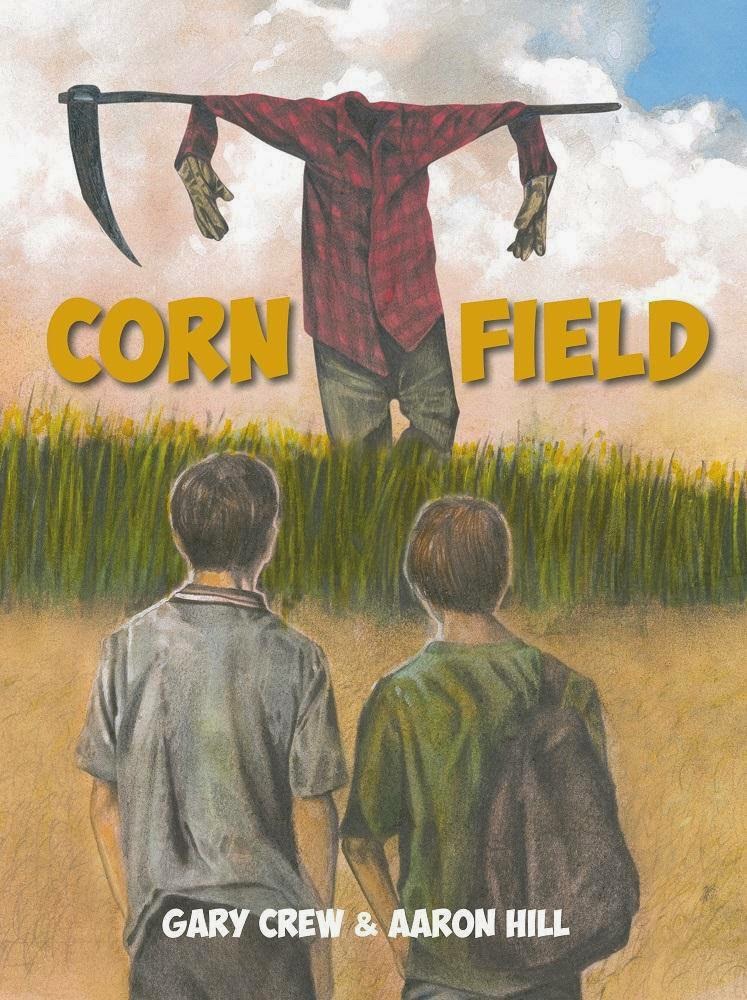 The narrator and his best mate agree that the corn field is a ‘bad place’, a feeling confirmed by the story of the Pinchley kid who went ‘nuts’ after going there.  Despite this they set off across the field with a mixture of bravado and trepidation .  Oppressive heat, the whispering of the corn, a plague of locusts and the unexpected appearance of a headless scarecrow made with a scythe, frighten the boys and they run terrified from the field.

A sense of foreboding permeates Corn Field as a hidden menace lurks on every page threatening both the physical and psychological health of the two boys.  The use of dark colours and shadow establishes a nightmarish quality that is reinforced by the often washed out appearance of the illustrations.  These form a stark contrast to the sharp black and white pencil drawings which stand out like moments of clarity in an otherwise chaotic world.  The background of the illustrations is comprised of fractured images and unfathomable shapes, like something randomly pieced together by a disturbed mind.  This sense of dysfunction is evident in the first illustration which shows the narrator from behind, in a chair facing a window, while the final illustration depicts the window broken and the chair tipped over as if the boy has fled from captivity.  The colloquial first person text creates an intimate story telling style while suggesting undertones of fear and threat.  This is felt in the repeated use of the word ‘giddy’ to describe the boys’ experience in the field and the narrator’s sense of guilt about his missing friend.

Corn Field is an outstanding picture book for older readers.  It is unrelenting in its suggestion of a nameless, malevolent evil that cannot be dismissed as mere urban myth – this is real horror and the reader is chilled to discover there is no soft ending.  The book seamlessly marries together text and illustrations to create a sinister and disturbing atmosphere.  It engages the reader on many levels and demonstrates how the modern picture book challenges the reader’s perceptions of the genre.