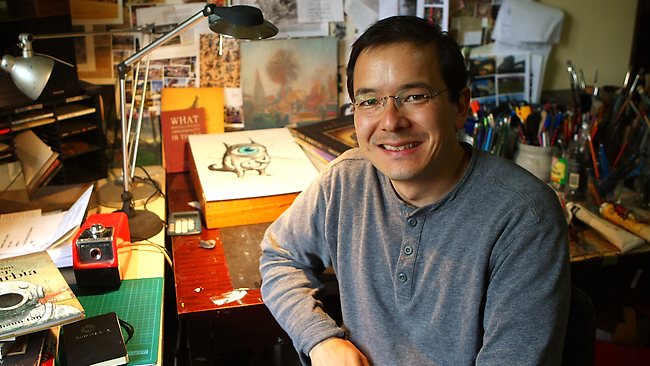 The amazing Shaun Tan won the Picture Book of the Year Award for his beautiful book The Rules of Summer.  As Shaun was unable to be at the Awards announcement in Canberra to accept his Award, he gave his acceptance speech via a pre-recorded video.  This is the text of that video…

Apologies for being unable to attend the awards this year, although I’m well represented by my editor Helen Chamberlin, with whom I’ve been in cahoots since my very first children’s book assignment, drawing pictures of a demonically possessed cat in 1996 – things haven’t changed much since, there’s another sinister cat in this latest book. There are a lot of wonderful things to say about Helen, but I’m sure most of you already know of her legendary status in the picture book world, only surpassed by her modesty.

Many thanks to the CBCA and to this year’s judges, whose task of arguing whether an apple is better than an orange is not one any of us should envy: especially when faced with such an array of exotic fruits each year. Much appreciation to my publisher Hachette, to Suzanne, Fiona, Dianne, Theresa, Isabel, Airlie, Chris, Christine and all the Hachette staff including the inspiring Matt Richell who is greatly missed.

Thanks especially to readers of all ages: all the people who truly make picture books what they are, arguably the most universal of all literary forms. Let’s forget for a moment those important-looking names on front covers. Writers and illustrators are, after all, such a weird bunch, the kind that prefer to work alone in little rooms – often an attic, back shed or basement – spinning crazy ideas that only see the light of day many months after they’ve gone to bed worrying about a badly-drawn line, a dodgy bit of phrasing or a missing comma, the conversion of a PSD file from RGB to CMYK for the correct GSM of paper, to the point of becoming borderline OCD. But that’s not what makes a picture book.

A book only really comes alive in the hands of a caring reader. And for this we have to thank a vast adoption agency staffed by countless benefactors: editors, publishers, printers, booksellers, publicists, teachers, librarians, parents, academics, critics and organisations such as the CBCA, who also bring books for young people to mainstream attention through these awards, often stimulating interesting discussions with their choices – agreement and disagreement being two parts of an essential dynamic in any healthy culture, and children’s literature should bear no exception. Without all these things, I think many books would just drift about like asteroids in space.

It’s a connection with the reader that matters the most. Consider the case of the child who declined to have his book “ruined” by Maurice Sendak’s signature; and another who was so excited to receive a handwritten reply from the same author that he ate it, literally scrunched the letter in his mouth and swallowed it. Both of these responses are entirely appropriate: pictures and words belong to the reader.

That said, all books do begin their journey on the maker’s table, and I’d like to acknowledge the collective daydreaming of my fellow nominees, reading like a who’s who of contemporary picture books. Nick, Freya, Margaret, Matt, Danny, Bob, Doug and Craig: not just brilliant creators but also wonderful people, all tapping into that magical unity of adult wisdom and childhood openness, of sense and nonsense mixed together beautifully.

I think I speak on behalf of everyone in saying it’s such a privilege to be able to potter around, ramble and scribble about imaginary things, and then have others thank you for it. It’s a far cry from being told off for drawing in class or for talking too much! Not that I condone such disgraceful and self-indulgent behavior. Just that, in the right context, people actually give you an award for it. So to all those young storytellers out there, keep up the good work, but discreetly if necessary, in your attic, shed or basement. We’re all counting on you! 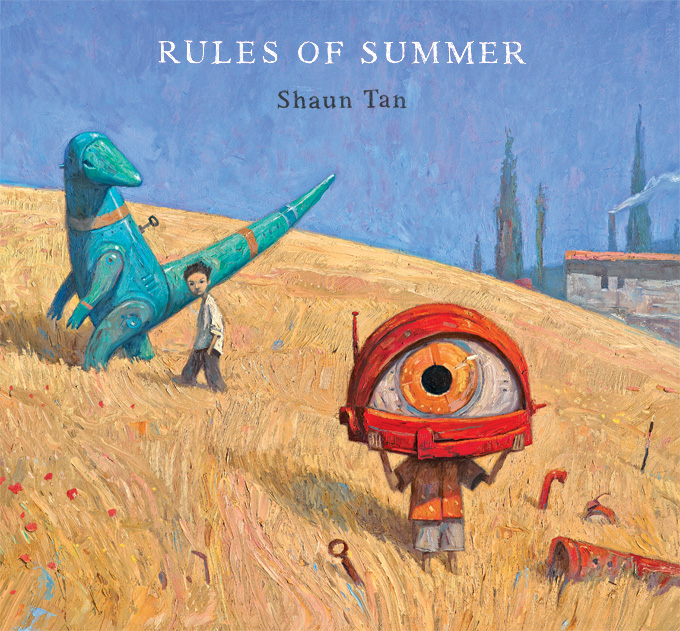