Kellie Byrnes talks about the importance of creativity, and her debut picture book, Cloud Conductor… 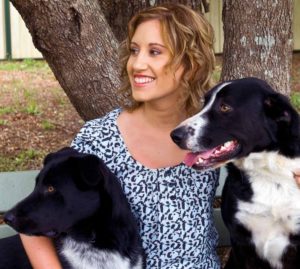 In my twenties I worked in the publishing industry, and while I loved being around books I did come to see just how challenging it is to become an author, particularly a full-time one. As such, I think the experience scared me off writing my own books for around a decade; I remember thinking that being an author was a dream I should fulfill when I was older and more experienced!

In 2015, after attending a literary festival in Wales, U.K., I came home invigorated and inspired, and realised I shouldn’t put off my long-held author dreams any longer.

Determined to at least have a go, I buckled down and started reading hundreds of children’s books. I attended courses, workshops, author talks and other events, and tried to immerse myself in the world of kidlit as much as possible. I soon felt the creativity I’d always had as a child start to bubble away again, and sat down to try and come up with some ideas.

One of the first things that actually came to mind was the idea of a character conducting clouds. I had been thinking about (prompted from a newspaper article, I believe) how it must be so tough for children to cope with illness. That is: how do little kids accept and deal with a situation that involves them not being able to do what they normally enjoy, because sickness has made their world so much smaller?

From here, I mused on how the imagination and the use of creativity would be one of the best tools in a child’s mental health toolkit. When I landed on the idea of seeing shapes in the clouds, and the title ‘Cloud Conductor’ popped into my head, I knew this was something to explore further.

After a few stops and starts (I had to learn more about picture book structure, for starters!), I finally had a completed first draft of my story, and felt so excited to have made progress. After working on a few edits and getting some critiques of the manuscript, I summoned the courage to attend my first conference, which was CYA (Brisbane) in 2016. I was very fortunate to receive interest from Wombat Books at one of my manuscript assessments at that conference, and a couple of months later I had a contract. 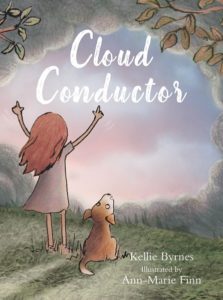 Today, I’m thrilled that Cloud Conductor has been released by Wombat, and is so beautifully illustrated by Ann-Marie Finn. Ann-Marie’s artwork helps to convey the layers of meaning in the text, and the colour palette throughout is just divine.

Cloud Conductor is a picture book that encourages children to have their head in the clouds and use their imagination to deal with any challenges that pop up in their lives. In the story, Frankie loves to just sit and watch the clouds. She conducts symphonies in the sky and listens to the melodies that only she can hear. As the seasons pass, Frankie is taken away from her bedroom on the tales and scenes she creates in her mind.

All children have to cope with difficult situations at some point, or see those they care about go through them. As a result, I think Cloud Conductor is a helpful tool for parents, teachers, librarians and other caregivers, as well as, of course, for kids. It can prompt discussions about resilience, inner strength, and empathy, and assist children to understand the benefits of creativity. Kids can think about how to support themselves and/or others through the use of visualisation and the imagination. In addition, the book will, I hope, encourage children to keep playing and let their minds wander and be free, in whatever form that may take.

Research has shown time and time again that creativity improves our mental and physical wellbeing. As such, in today’s world, where bullying is rife and more children than ever are anxious and stressed, the imagination should be a tool we’re all using, no matter our age. If even just one child is encouraged by Cloud Conductor to do this, I’ll be happy!

A book trailer for Cloud Conductor can be found on YouTube.

This post is part of Kellie Byrnes’ blog tour, organised by Books On Tour