You are at:Home»Interviews»Meet Catherine Carvell Debut author Catherine Carvell tells Reading Time about her life long dream to be a published author, and how some ‘wild things’ gave her the push she needed to make her dream come true…

I was born in England and lived there until I was eight.  I was a happy child and memories of my early days are filled with friendships, changing seasons, skipping ropes and books.  I was an avid reader from a very young age.  Some of my favourite books included The Famous Five by Enid Blyton, Five Children and It by Edith Nesbitt, the Little Women series by Lousia May Alcott and The Secret Garden and A Little Princess by Frances H.  Burnett.  I read many others too, but these particular stories stayed in my heart for many years.  I’m not sure why they resonated with me so deeply, but I still remember the thrill I felt crawling under the covers each night to read a little bit more.

Reading wasn’t my only joy as a child.  I also took great pleasure from nature.  I climbed trees, kept earthworms as pets and spent hours pressing wild flowers or peering down a microscope at the alien eyes and hairy legs of dead flies.

I discovered I could write when I was seven.  My teacher told us to think of as many spooky words as we could, then use them to write a story.  Looking back, this was the first time I’d been instructed to play with words and as I wrote, the classroom around me slipped away.  My story had no characters and no plot – just a single vivid image of a darkened tombstone, and a chilling sense of foreboding.  It was a joy to write and, I thought, quite brilliant!  So when my teacher took me aside the next day, I happily prepared myself for accolades and praise.

But to my confusion, I received a scolding.  My teacher informed me I would get in no further trouble if I told the truth and revealed where I’d copied the story from.  I explained I hadn’t copied the story, that I’d written it myself.  But the more I tried to convince her, the more her frustration grew.

As a child with a strong sense of justice, this experience could have been devastating.  But somehow I was thrilled.  After all, her disbelief proved my writing was good.  Unbelievably good!

From that moment on I knew that I would one day be an author. 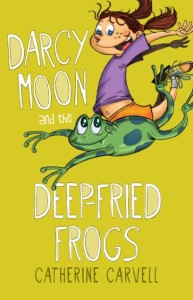 My family migrated to Australia when I was eight and I was raised in the northern suburbs of Perth.  My love of fiction stayed with me, but my parents and teachers were a pragmatic lot, and convinced me that becoming an author was akin to growing wings and flying to the moon.

But I couldn’t deny my desire to write, and I still felt a strong interest in nature.  I studied a Bachelor of Science and a Post Graduate Diploma in Journalism, hoping they would land me a job doing something I loved.  But once I graduated, as so often happens in life, I landed a sensible government position that paid the bills, and lost sight of my youthful plans.

I travelled, share housed, met my husband and many years later as I read Where the Wild Things Are to my children back in Perth, I realized something amazing – I had motorbiked across Australia, backpacked through Europe and snorkeled with whale sharks, but the most exciting adventures of all, had taken place within a children’s book.

I remembered how sure I’d been as a child that I would become an author.  When had I stopped believing?  When had I stopped trying?  My children were watching and learning from me, and I needed to show them that dreams were worth chasing.  So I picked up my pen.

I wrote when the babies slept.  I scribbled in notebooks in the dead of night.  I ignored the dishes and dusty floors.  I joined critique groups and online courses.  Every sentence I wrote felt like a victory.  I was whole again.

Two years later I had a completed manuscript and, at the same time, discovered we were moving to Singapore.  Changing countries with two children under five kept me busy, and when I finally had time to read my manuscript again, I was able to see it with fresh eyes.  I knew exactly where I needed to make changes.  I rewrote the whole thing.

I kept editing and getting feedback through every avenue I could (competitions, conferences, panels, peers), and eventually, in early 2012, I had a manuscript I thought was ready.

I researched publishers.  Were they accepting unsolicited manuscripts?  What sort of titles did they publish?  All that stuff.  Scary.  Fremantle Press were accepting manuscripts by West Australian Authors or with West Australian content and setting.  And they had a strong children’s section, which included mid-grade.  My story seemed like the perfect fit.  So I sent it off.

Seven weeks later, I got a ‘we would like to publish your manuscript’ email.  I squawked and squealed and danced around the house like a maniac.  It was a miracle!  A miracle four years in the making.

Darcy Moon and the Deep-fried Frogs was released in March 2014.  It was my first published book, and a life long dream come true.