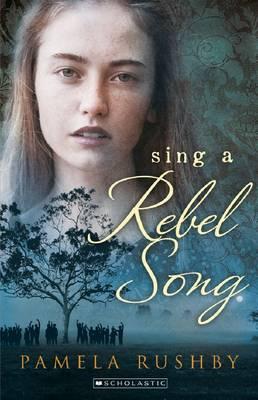 It has been claimed that the nearest Australia came to civil war was during the shearers’ strike of 1891. Thousands of men from all over Australia gathered in Queensland to support the Shearers’ Union’s rejection of the attempt by the squatters to reduce wages and conditions. Scab labour was transported to pastoral districts, and the army was brought in to quell any protest by unionists. Both sides primed their weapons. The fiery revolutionary, William Lane, urged the shearers to stay firm, but starvation and the squatters’ control of the courts finished the struggle in favour of the pastoralists. Lane led many of his supporters to the colony he set up in Paraguay, New Australia.

Rushby has told the whole thrilling story through the eyes of Maggie, a twelve-year-old girl in Barcaldine, who takes on the task of keeping the Brisbane newspaper, The Worker, informed of the daily events. Clara, and Clara’s brother, James, are the daughter and son of the local squatter, and also Maggie’s close friends, so we get the other side of the story as well, as Maggie argues with them over the rights and wrongs of the situation.

This is a fascinating and important part of Australian history. The strike heralded the start of the Australian union movement’s role as the central force for an egalitarian society, and Rushby has revealed just how inspirational were the times. Maggie’s role is not merely to report on what is happening: she is a model for the new woman who is about to emerge – strong, idealistic people like Mary Gilmore and Louisa Lawson.

There is plenty of action, political arguments, a social picture of the times, and the beginning of a love affair in Sing a Rebel Song, and characters who step off the page into the reader’s imagination.