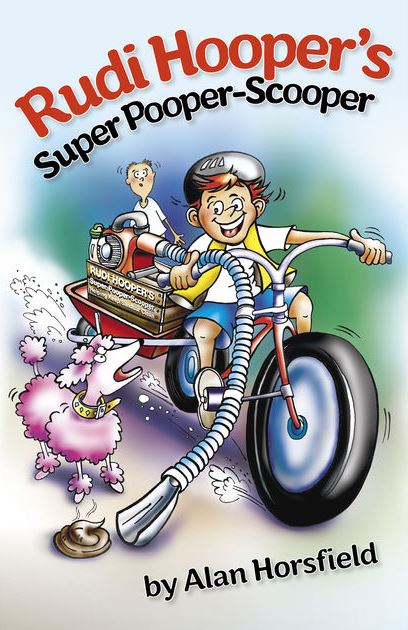 Rudi has never really stood out — in school, in the neighbourhood, in anything. But that’s all about to change thanks to his latest invention, the Super Pooper-Scooper. As part of the Tidy Towns initiative, Rudi is out to clean up the streets and he is starting with dog droppings. It’s not going to be easy though. He’s got competition and not everyone in Sandbar thinks dogs (or their droppings) are a problem. Fortunately, Rudi has his little brother Morris looking out for him. And when Morris uncovers a scheme to keep Rudi from being student of the week, it seems the Hooper boys will finally get the attention they deserve.

The Hoopers are well-meaning family who have found a way to get their boys a chance at fame…the Tidy Towns initative. While Morris tries his luck in the poetry competition (with a poem that turns out to be anything but publishable), Rudi focuses on his ever-growing pooper-scooper invention. From shovel to motorised vehicle, Rudi keeps building a bigger and better tool for the job. And as he does, his family’s pride grows right along with it. The only one who wonders if things might be getting a bit out of hand is Morris. But instead of working against his brother, Morris tries to help by figuring out the mystery that weaves itself through the story. In a not so clean cut ending, the boys’ dreams of stardom may not come to fruition in the way they hoped, but the town of Sandbar will never forget this Tidy Towns competition.

Alan Horsfield is the author of dozens of books for children and is an active member in Australia’s children’s literature community. He has created a fun, entertaining chapter book for primary-aged students in Rudi Hooper’s Super Pooper-Scooper.