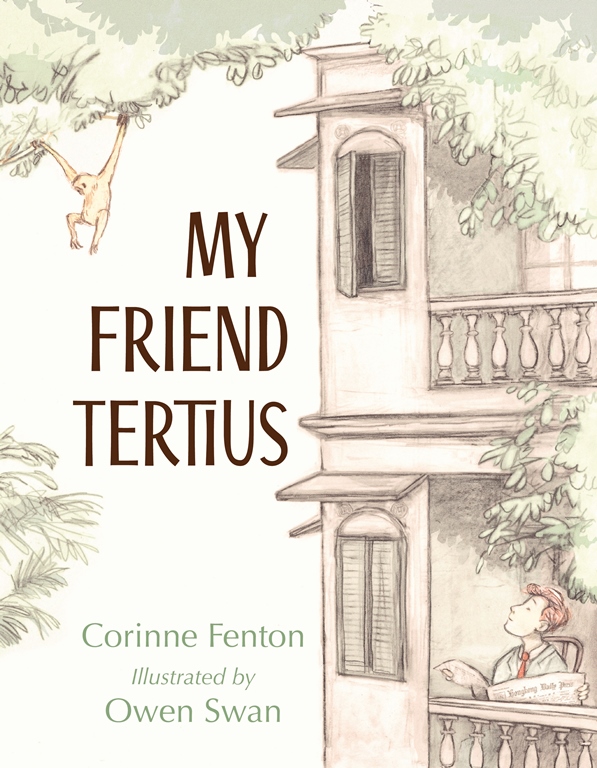 Friendship comes in many forms and, as this delightful book makes clear, a friend does not have to be human! This is based on a true story of the bond between Arthur Cooper, a man working in the British Intelligence Service in Hong Kong just before World War II and  Tertius, a gibbon he rescued as a baby from a seller of exotic animals. Tertius becomes Cooper’s constant and loyal companion and travels with him to Singapore. Just ahead of the fall of Singapore to the Japanese, Cooper manages to catch the last ship leaving the country. Eventually they travel to Australia, landing in Fremantle and finding their way across country to Melbourne. Unfortunately, Tertius is an illegal import and officialdom catches up with them. A solution is found however, and the story has a happy ending.

We, as readers, are certainly encouraged to take the side of Cooper and Tertius as we join with them as they make their way across the Nullabor by train, narrowly escaping being caught on a number of occasions. When Tertius is finally found out and they have to face the police, the perspective of the illustration draws us in to the tense situation. The viewer is positioned behind Cooper’s back, where we see the fragile fingers of Tertius clinging to Cooper’s shoulder as he faces a ferocious-looking policeman. The final illustration of a reunion between Cooper and Tertius some years later is very heart-warming as they gaze fondly at each other, that gaze erasing the separation they have had to undergo.

The muted colours used in the illustrations throughout evoke an earlier time. The change of scene from Hong Kong to Singapore to Australia outlined in the written text is reinforced by the illustrations as we move from the rickshaws of Hong Kong, to the ex-pat life in Singapore, to the colonial buildings of Fremantle and finally to their destination in Melbourne.  The atmosphere of war is also suggested by the illustrations of burning buildings and soldiers on the streets of Singapore, and the menacing outlines of war planes framed by a window as Cooper and Tertius hide under a table. The layout of the book is varied and interesting, with double-page spreads used to give a panoramic view of the action described in the written text.

This is the kind of story which lends itself well to the picture book format. It will work well as a story to be read aloud and discussed as well as being enjoyed by beginning readers, who may also need some discussion on the themes of biodiversity, war and history.  Teachers Notes are available on the Allen & Unwin website.