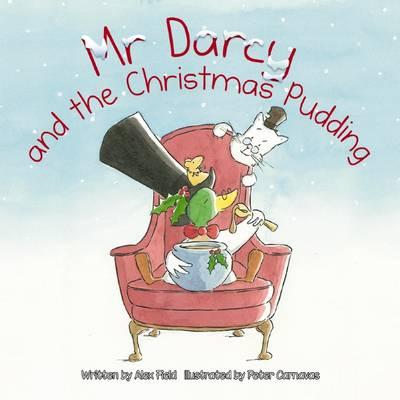 Mr Darcy and the Christmas Pudding is a picture book about Christmas with a focus on the traditions of making Christmas pudding.

On a cold winter’s day the farm animals gather in Mr Darcy, the duck’s, lovely home which is warmed by a roaring fire. It is Stir-up Sunday and they have come to make Christmas pudding.  All are welcome except for the cat, Mr Collins, with whom Mr Darcy is annoyed because he tried to catch Maria, the mouse.  Mr Darcy finally relents to the pleas of Lizzy, the duckling, to allow Mr Collins into his home. On Christmas Day the animals return to Mr Darcy’s house to share a delicious looking Christmas pudding with steam rising off it.

The festive, joyous tradition of gathering to bake Christmas pudding on Stir-Up Sunday is portrayed through happy facial expressions on the characters and the lively illustrations which exude energy.  Mr Darcy’s home is a hive of activity as the animals gather bowls and stirring spoons, take turns stirring the mixture and then drink hot chocolate and play charades.

I love the way that the characters’ demeanour is conveyed through their dress and body posture. Mr Darcy wears an elegant long top hat, red bow tie and prinz-nez spectacles. His posture is haughty with his yellow beak held high and pointing upwards.

The illustrations are highly effective at revealing character emotion through facial expression.  Mr Collins, in particular, displays a range of emotions. He looks triumphant as he pounces on Maria the mouse. Then, on the next page he is indignant when Mr Darcy rescues Maria the mouse away from him.  In turn, Maria looks back at Mr Collins with a smug smile on her face as Mr Darcy haughtily carries her away to safety.

With female characters who wear colourful bonnets and the male characters wearing top hats, scarves and spectacles, the book has an English countryside “Jane Austen” feel.

This is a delightful Christmas picture book for children aged 3-6 years.