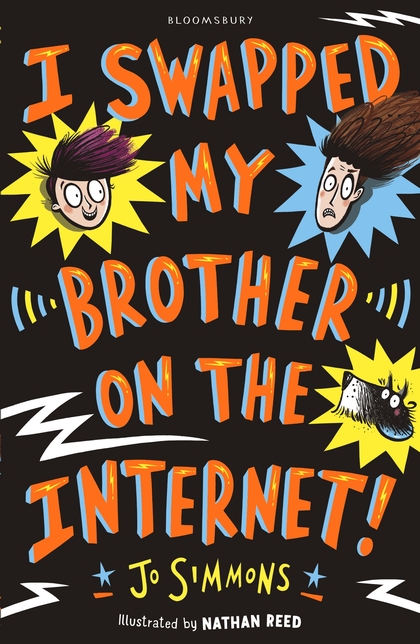 Jo Simmons is an international author inspired by funny family fiction; her previous titles include Pip Street and Can I Give Them Back Now?: The Aargh to Zzzz of Parenting. In I Swapped My Brother on the Internet, almost-ten-year-old Jonny finds out that trading in his own older brother for a new one is a bit more complicated than he expected. Middle grade readers with siblings will no doubt relate to this humorous fantasy tale of secret desire for the new and improved in the brother (or sister) department.

Jonny’s brother Ted is annoying and obnoxious. He calls Jonny ‘the human sloth’ for being slow, and makes fun of his fear of climbing. Their single mum comes across as somewhat vague and unavailable, conveniently leaving the boys to fend for themselves without much responsibility. So left to his own devices (raising questions of internet safety), Jonny discovers a new website called ‘Sibling Swap’, and so the swapping absurdity begins. Upon entering his sibling requirements, Jonny is cycled through six new brothers via the mysterious, and slightly dodgy internet scheme. A merboy, a boy raised by meerkats, the ghost of Henry VIII, a hyperactive bet-obssessed cutie, a tech-head brother/sister and a sneaky identical match subsequently line up for role of brother to Jonny. But some ridiculously outrageous behaviours, and the niggling thoughts in Jonny’s mind, finally allow him to make sense of his true feelings for his real brother Ted. Predictably, Jonny begins the search to reclaim Ted, with the help of his unsuitable matches. The plot takes a turn from this witty, slow-paced consecutive narrative to a quickly-resolved mystery of ‘who-dunnit’. An aspect that perhaps could have been introduced in the beginning to add to the growing tension. Nevertheless, the humour is charmingly dry, and the black and white illustrations shrewdly jaunty and expressive. The awareness of sibling  attachment, whether overtly recognised or not, is there for readers to appreciate. And this is what takes this book from a comical fantasy to realising a real emotional connection.

An enjoyable, rollicking read to be taken at face value, that humorously mixes adventure, heart, and relationship nuances. For children from age seven.