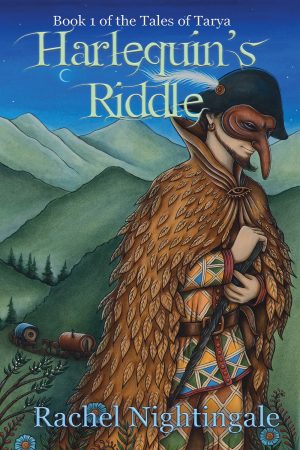 Mina lives an ordinary village life, her destiny to be the carer of her addled Uncle, a man heart-broken and confused by the death of his wife. When the Gazini Players visit Andon, Mina is entranced by their ability to capture and transport the audience through story and a magical ability to transform into various characters. Her brother, Paulo, had joined a travelling troupe of players ten years before, promising to return one day, and has not been seen since. Although her real ability is for storyteller, Mina begs her father to let her join the players, where she takes on the role of the narrator. The troupe is on its way to the Festival of Light in the royal city of Aurea where they will compete with other artisans for the King and Queen’s approval. As she travels, Mina learns the secrets of Tarya, a mythical world the players visit in order to take other’s dreams and use them for their acting transformations. Mina’s ability to go to Tarya is instant and stupendous, allowing her to travel further than the others can go. Within Tarya, she learns the dark secrets of the players’ acting, and the horrifying truth of what may have happened to Paulo. She has no choice, at the end, but to leave the troupe with its terrible secrets, and continue alone on her search for Paulo.

This debut novel is vivid and evocative. The story is full of colour and secrets, a journey through the history of commedia dell’arte interwoven with fantastical elements to create  intrigue. Despite needing slightly more attention to some stylistic elements, this novel will stand comfortably among favourites of fantasy readers. The rest of the trilogy will be anticipated by many, especially as this first tale leaves readers with many unresolved questions.