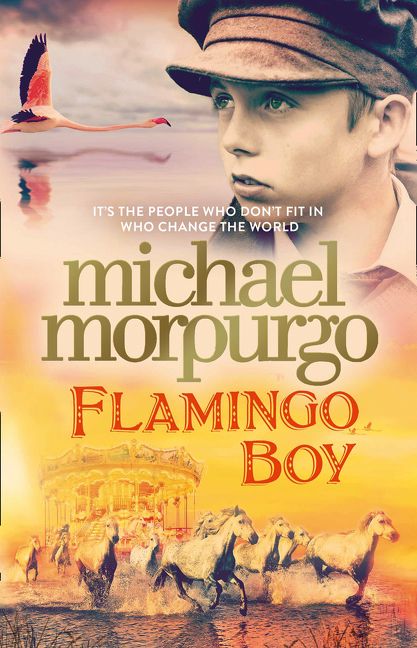 During his gap year in 1982, eighteen-year-old Vincent is in France seeking the spot where Vincent Van Gogh once painted a beach scene, a print of which he was given by his grandparents and which has hung above his bed for many years. While there he falls ill and is rescued by the autistic Lorenzo who takes him to the farm where he lives with his friend Nancy. As Vincent recovers, Nancy tells him the story of how she and Lorenzo met and the events during the war that brought her travelling family and his farming family together when the carousel her family operated was destroyed.

Lorenzo is the ‘Flamingo Boy’ of the title as he has a special affinity with animals and in particular the flamingos that inhabit the local marshland. When Nancy’s family take refuge from the invading Germans at the farm, she and Lorenzo form a special friendship. However, the brutality of war soon invades even their remote sanctuary and it is only the kindness of one German soldier that saves the group from total disaster.

This is a gentle tale where the story-within-a-story slowly reveals complex characters and the engrossing plot slowly unfolds. Its themes of strength, courage, friendship, the differences that divide us and the humanity that unites, have a timeless appeal and are carefully crafted by Morpurgo against a wild landscape and the tragedy of war. However, it is the healing powers of Lorenzo and the passing of time that restores the families; as they work to rebuild the carousel they also piece together their shattered lives.

Flamingo Boy is highly recommended for readers from lower secondary to adult. Morpurgo’s novel evokes the untamed rhythms of nature and the raw intensity of human emotions in a beautifully written work that resonates with hope and compassion.