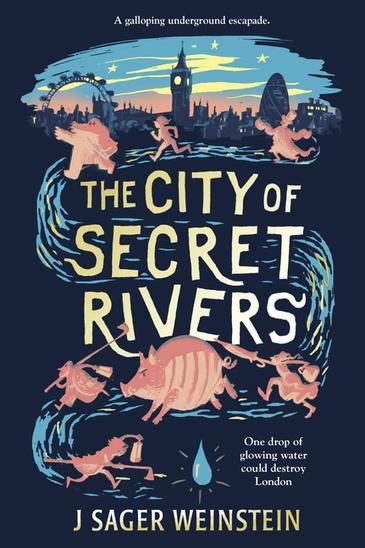 Every time I picked up this book it brought a grin to my face. This story hit the same funny bone that loves Horrible Histories, Monty Python, and Blackadder (although without the adult references!).

Hyacinth is a snarky heroine who has just moved with her mother from a farm in Illinois to a flat in London. Her aunts and grandmother have prepared her with all sorts of useful skills, like plumbing, but she doesn’t realise just what they’ve prepared her for until the day she accidentally sets loose a magical drop of water with the power to destroy London. Now Hyacinth and her weird neighbour, Lady Rosalyn, are trying to find that drop of water in the rivers hidden underneath London, and rescue Hyacinth’s mother from the creepy Saltpetre Men.

The cast of characters who come into Hyacinth’s story are fantastic. There is the giant pig Oaroboarus, who talks in carefully chosen flashcards. He claims to have a card for every occasion, and I had my boys falling over laughing when I read out loud what happened when Hyacinth challenged this claim. The scavenger Newfangled Troy, who turns up when he’s most needed, but is not always trustworthy, became one of my favourites for his off-beat charm and wildcard role.

The landscape of The City of Secret Rivers is just as quirky as the characters, and just as charming. Even when Hyacinth finds herself caught in creepy and dangerous situations, the menace is always balanced with a certain sense of Jim Henson-esque bizarreness.

The premise at the heart of the book is that ninety percent of London’s history makes sense, and the remaining ten percent is completely bonkers; and that ten percent is where one should look for the magic. The weird and inexplicable things can be explained if you know about the powerful magic that runs through the rivers of London. I adored the hints and snippets of historical information seeded throughout the story – it left me inspired to find out more.

Hyacinth is frequently, and literally, out of her depth throughout her adventures, but she possesses a resourcefulness and determination. Hyacinth is constantly called on to try and work out who she can trust in this strange adventure. Sometimes she gets it right, and sometimes she fails spectacularly. She learns from her mistakes and pushes on, and I just loved her snark in the face of the weird and wonderful.

Girls and boys aged 10 and up with an off-beat sense of humour and a love of adventure and magic are going to have a lot of fun with The City of Secret Rivers.